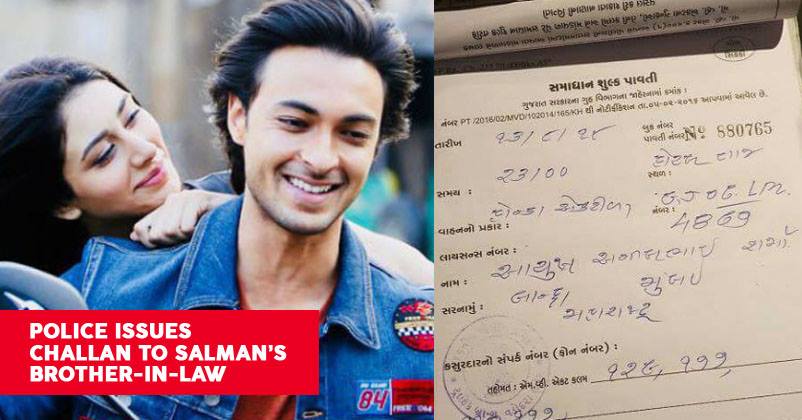 Salman Khan is indeed a masiha for many. Recently, he launched Aayush Sharma, his brother-in-law in this world.

Aayush’s movie Loveratri is all set to hit the screens on the 5th of October. But before that, the actor has been surrounded by troubles.

Well, he’s in news, but unfortunately, due to a problematic situation. Well, he along with Warina Hussain, his co-star were caught by Gujarat police because they were without helmets.

Yes, they were fined while riding bike in streets of Vadodara. Chalan of Rs 100 was issued to both Warina as well as Aayush. Well, a fan uploaded pics of Aayush and Warina on Twitter and tagged Vadodara police.

And soon after this, Vadodara police uploaded pic of the chalan that they issued to Aayush and Warina.

Vadodara police is doing their duty really well. Even though they are stars, they got punished for not following the rules.

Kajol Trolled Badly For Her Jeans During Her Film Promotions. They Told Her To Get A New Stylist
Pics of Priyanka & Nick’s Roka Ceremony Are Out. They Are Beautiful