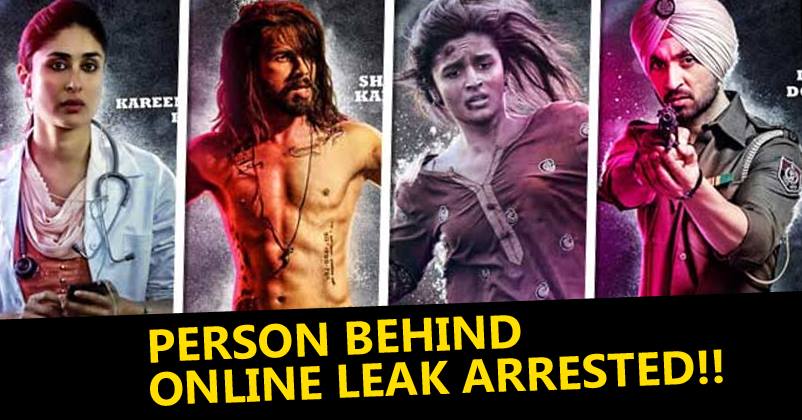 Everyone was shocked when ‘Udta Punjab’ was leaked online 2 days prior to its theatrical release! Do you want to know who leaked it online?

Well, the Cyber Cell of Mumbai has arrested Deepak Kumar, the owner of torrent site allzmovie.in on Wednesday in connection to this leak. Yes, the 1st torrent of ‘Udta Punjab’ appeared on this website. After conducting some searches in Delhi, finally the police team was able to trace the accused, who is identified as Deepak Kumar.

A statement by Mumbai Police said,

“The complainant was informed that the said movie was leaked on internet on two separate links of website of Torrentz.com. On downloading the movie it was revealed that the first sensor copy was stolen and uploaded on Torrentz.com by user robby007,”

“During the investigation, it was revealed that website allmovie.in had uploaded the said link on its website. A team visited Delhi and adjoining areas and after diligent efforts Deepak Kumar was traced. He was summoned to the cyber police station, Mumbai, and after thorough investigation, his active role was revealed. He has been arrested,”

Earlier, the producers of the movie had lodged a complaint with the Cyber Cell of Mumbai after the film’s copy with “For Censor” watermark was leaked online on several torrent sites.

This had raised a doubt in the minds of many that Censor Board was responsible for this leak.

However, all these allegations were rejected by Pahlaj Nihalani, the chairperson of CBFC stating that the board has no role to play in this leak.

Nihalani had also added that “The person responsible has already been identified and the leak will be tracked down. We will cooperate if we are approached as part of the investigation,”

The makers of the movie had to struggle a lot for removing all the copies of that movie from various sites. Now that Deepak Kumar has been arrested, let us see what action is taken against him! Do let us know your comments in our comments section below.

You Will Hate Salman Khan Even More After Reading What He Did With A Female Film Critic!
His Salary Was Rs 500 Crore Per Year But Still He Resigned! Reason Will Shock You