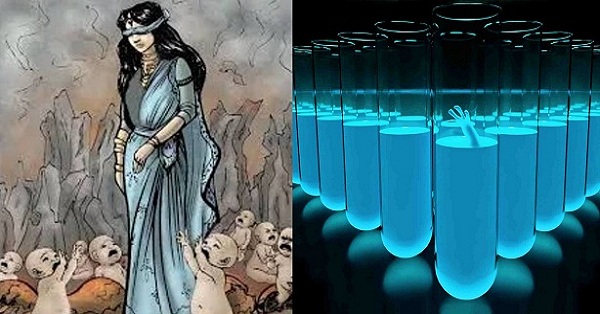 If I would have said something like test tube babies 50 years back people would have termed me a perfect lunatic requiring psychiatric help. Today’s society first heard of test tube babies and its process in 1977. In India it was told to children as bedtime stories by grannies since the time when the west did not even know what a cell was.

The first evidence of Indians having knowledge of producing test tube babies is in the era of Mahabharata (3000 BC). Strange as it seems, it is very true that the texts relating to Mahabharata elaborately explain of a process similar to modern day ‘In vitro fertilisation’ or test tube baby. If we go through how the 100 Kauravas and their sister were born at the same time, we see that the concept of ‘In vitro fertilisation’ is explained. We bring to you the story of the birth of Kauravas. The Story Of The Jars Of Ghee:-

After Gandhari was married to Dhritarashtra she wrapped a bandage over her eyes and vowed to share the darkness that her husband lived in. Once Sage Vyasa came to visit Gandhari in Hastinapur. She took great care of the comforts of him and saw that he had a pleasant stay in Hastinapur. He was pleased with Gandhari and granted her a boon. Gandhari wished for one hundred sons who would be as powerful as her husband. Vyasa granted her the boon and in due course of time Gandhari found herself to be pregnant. But two years passed and still the baby was not born.

Meanwhile, Kunti received a son from God Yama whom she called Yudhishthira. In a fit of envy, Gandhari bumped herself against a wall and went into labour giving birth to a hard piece of lifeless flesh that was not a baby at all. Gandhari was devastated as she had expected a hundred sons according to the blessing of Rishi Vyas.

She was about to throw away the piece of flesh when Rishi Vyas appeared and told her that his blessings could not have been in vain and asked Gandhari to arrange for one hundred jars to be filled with Ghee (oil). He told Gandhari that he would cut the piece of flesh into hundred pieces and place them in the jars, which would then develop into the one hundred sons that she so desired.

Gandhari told Vyas then that she also wanted to have a daughter. Vyas agreed and cut the piece of flesh into one hundred and one pieces and placed them each in the jars. After two more years of patient waiting the jars were ready to be opened. From these jars emerged the 100 Kauravas and their sister Dussala.

The modern day scientific technique of ‘In vitro fertilization’ must have existed during that time also though we have no other records of it. What was mentioned as jars could be specialized culture flasks, similar to those used in laboratory and the ghee could be the required nutrient solutions to sustain. That means it would have been somatic cell cloning technique or something similar to that which could have been a more advanced science in those days itself. Vyasa being a genius would have handled it.

Continue Reading
You may also like...
Related Topics:Birth of Kauravas, Indian Mythology, Mahabharata, Test Tube Babies, The First Record Of Test Tube Babies: The Story Of The Jars Of Ghee

Remember That Boy Who Got 100/100 In Economics? This Was The Trick He Used
10 Things You Will Relate If You Love Chips