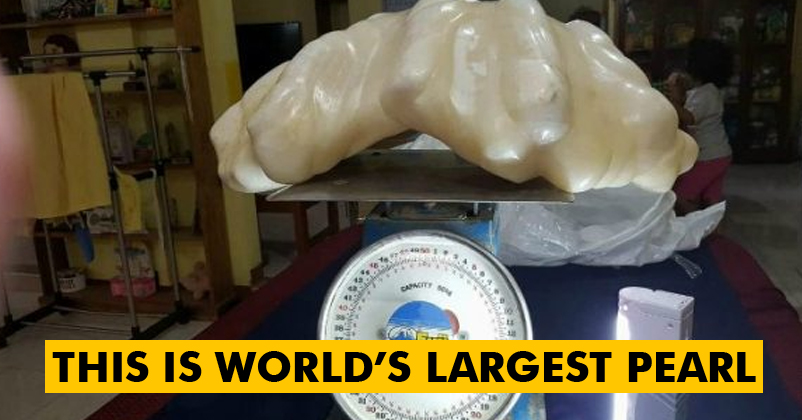 Life is not a wish granting factory no matter how lucky or deserving you are. They both have different meanings, but if a person has either of them, then someday, he will certainly make it big. But discovering the world’s biggest pearl and that too just right under your bed is something way more than just a mere luck. It’s fancy to observe that getting a pearl is nowadays considered as a ‘MERE’ luck. No wonder people are discovering it just right under their bed ! !

This Filipino fisherman had never really thought that the fancy stone that he found nearly 10 years ago would change his luck. That very fancy stone turned out to be a whooping 34 KG Pearl measuring 1 feet wide and 2.2 feet in length. The price of this pearl is whopping $100 million (Rs 670 Crore). Currently it is put on display in Puerto Princesa City, Philippines for public viewing. The pearl was found in the sea off the coast of Palawan Island. The story is in itself an interesting one. On one fine day, the fisherman was out during the storm and attempted to anchor his boat. The anchor got stuck on something which he supposed it to be a big rock. He later on decided to swim down and pull up the anchor by himself and to his surprise found this pearl, which he had no idea about what it was. And hence he kept it along with him for the next 10 years under his bed thinking it to be just a lucky charm. Indeed it was. But in an unfortunate or rather fortunate accident, his house got burned down and as a result he had to come to the other side of his town. While doing so, he decided to get away with the pearl. Since that apparent ROCK or in more proper words, THE PEARL was quite heavy, he entrusted it to his Aunt Aileen Cynthia Maggay-Amurao who was apparently an employee in local government as a tourism officer.

Seeing such a big Pearl for the first time, she informed about it to the higher authorities. Later on she handed it to the mayor, Lucilo R Bayon, to serve as new tourist attraction of city. She also posted the pictures on Facebook and asked many Geologists and Archeologists to confirm about the existance of any other pearl bigger than this.

This post has been shared for more than 3000 times and the pictures have already gone viral on internet.

If the images and information provided above are true, then this pearl is the biggest and heaviest one as compared to the previously known biggest natural Pearl of Lao Tzu, discovered in the 1930s. The pearl which weighs 6.4 Kg was also discovered in Philippines.

Wasn’t that something interesting ? What are your opinion about it ? Share it in the comment section below.

British Journalist Trolled India’s Olympics Performance & Twitter Made Him A Joke In No Time
When PM Modi Called An IAS Officer At 10 PM… A Story No Indian Can Miss To Read!