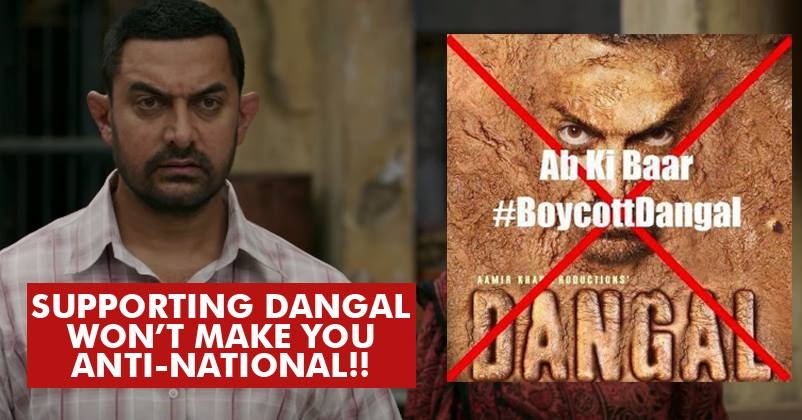 Who is a traitor ? The answer is simple, yet quite complicated in its own way. You just can’t simplify issues like these in just one mere single sentence. You can’t compile the ideology of nationalism and patriotism in just one single criteria. Human psychology and mind is much vaster than the shallow imagination and perception of few idiots.

Yesterday Aamir Khan’s new movie – DANGAL trailer was released and for obvious reasons it got one of the biggest view counts (response) in 24 hours. Till now it has got more than 10.5 million views. Seems like everyone was waiting to watch his movie’s trailer.

Well, even Justin Bieber’s Baby video got more than that, but the difference lies in the fact that more than almost 2 lakhs of people have liked DANGAL’s trailer. And it’s just mere 14 thousand people who have disliked it. Going through these stats, it does seem like most of the population of our country still loves him the same despite what his haters and the new entrants in this category – (the ones who decide the degree of nationality of an individual) had portrayed his image in the last few months. It is important to note that someone who doesn’t feel safe in our country should not necessarily be tagged as an anti-nationalist. Now it is a general perception that women in Delhi are not safe. Some people had conducted a survey and 73% of women felt that Delhi wasn’t safe for them. Does this make them anti-nationalist just because they said that they don’t feel safe ? Definitely not .

Aamir Khan’s wife Kiran Rao had also made the same statement and within a single day, she and along with her husband AAMIR KHAN was dragged into this controversy. Some people asked them to move to Pakistan and some serious NATIONALIST booked a flight ticket for them to PAKISTAN. They asked everyone to abolish the brand that he endorsed, his upcoming movies and anything that is even barely related to him. And the sad part is that, many people followed it without using their sense at the first place. Now, the way his trailer got the epic response, it doesn’t seem like those negative statements made any sense. Where are those people now who made such demeaning statements. The truth is, they have vanished. And they will be back again when our emotions will be running high on sensitive issues. They breed on our emotions and play with our sentiments. And brainwash the young and vulnerable minds of our country for their own personal gains.

Although we are the ones who allow such people to keep their heads up and give them a chance to stand up as a public figure and opinion makers which they are not. We are the ones responsible for making them believe in themselves that they are the supreme authority who have the right to take offense, act accordingly to their ego and make star false propaganda in the form of hoax and fake messages against any personality.

It is our duty to not to fall into such traps. We should be sensible enough to judge what is right and what is wrong for us to watch and listen. They can’t hold the right to broadcast or pass any film, book or for that matter even a small documentary.

Now these very people once asked you to abolish SNAPDEAL app from your smartphones just because of Aamir Khan’s intolerance comment. People followed it at huge numbers and the company’s public image did get hampered through this. But these petty petitions and childish propaganda stand nowhere when it comes to real deals. Snapdeal recently surpassed its internal sales targets with a high margin and has already touched Rs 500-600 crore in gross merchandising value. Now where are those haters who were asking others to uninstall this app ? We need to understand that doing something silly under the influence of false nationalism isn’t wise. The sensible citizens of India have indeed answered such people without banging any sticks. And that is how we should deal with such people. NEVER EVER PAY ANY HEAD TO THEM.

You want to know the real opinion of Indians on Aamir Khan ? Have a look at it.

We Indians, i.e majority of the people of India have shown their love for his movie’s trailer which resulted in bagging the top spot of MOST TRENDING VIDEOS IN INDIA on YOUTUBE. This wouldn’t have been possible without their love for Aamir Khan.

Now without being a hypocritical jerk, I would even like to add up that if you didn’t find this article worth reading and don’t agree with my opinion, you have every right to oppose it. However there is just a small reminder, always try to listen to yourself like how u did right now rather than blindly following false propaganda like how people did in AAMIR KHAN’s intolerance case and many such instances.

I will be joining you guys in the comment section below for a much further detail discussion about this issue. Share your opinion fellas ! !

OMG! Ironic Politics Of India Just Got EXPOSED In Renuka Shahane’s Latest Rant On Facebook!
Secret Of One Of The Most Mysterious Places, Bermuda Triangle, Resolved Finally?