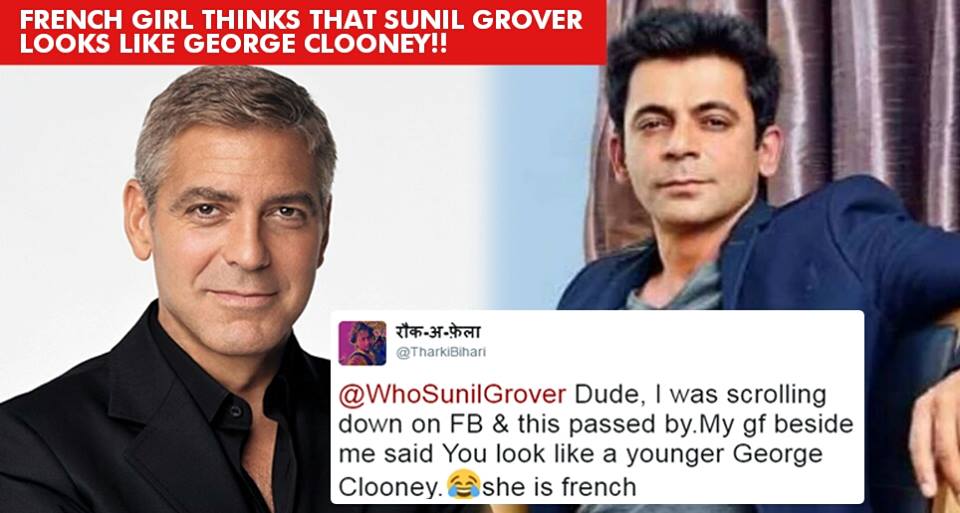 Sunil Grover is one of the most loved comedy actors we’ve in India. One fact that got proved after his fallout with Kapil Sharma was that he has an equally aggressive fan following. Sunil Grover, though made a visible distance from The Kapil Sharma Show, is still doing some comedy gigs to entertain his fans. It was obviously sad to see him rejecting all the requests regarding collaboration with Kapil again; his calm and humble attitude while defending his self-respect was the best thing we noted.

Sunil Grover, who is busy spending some quality time with family these days finds out some time for Twitter and manages to leave a smile on our face with his tweets and replies.

One such incident just happened, when a Twitter user wrote to Sunil Grover that his French GF finds him like younger George Clooney. Checkout-

@WhoSunilGrover Dude, I was scrolling down on FB & this passed by.My gf beside me said You look like a younger George Clooney.😂she is french pic.twitter.com/ykrtRn0ZPa

@WhoSunilGrover Dude, I was scrolling down on FB & this passed by.My gf beside me said You look like a younger George Clooney.?she is french.

This was the photo the guy was talking about; And guess what Sunil Grover replied-

I completely agree with her. She makes sense to me. https://t.co/mNVv1845b1

I completely agree with her. She makes sense to me.

There were some really lovely reactions to this tweet of Sunil. Checkout-

HE IS A HERO OF THIS GENERATION

WE LOVE YOU SUNIL PAJI💗

@WhoSunilGrover please come back to the show not for @KapilSharmaK9 but for audiences who love you so much and need you so much.

Isn’t that hilarious? Well, our Sunday is done with this interesting conversation. What about yours?

Continue Reading
You may also like...
Related Topics:Sunil Grover

18 Things A Guy Thinks While Kissing A Girl! Check Out The List & See If You Think The Same!
Dog Suddenly Appears In The Newsroom During Live Telecast! Reporter’s Reaction Is Priceless!