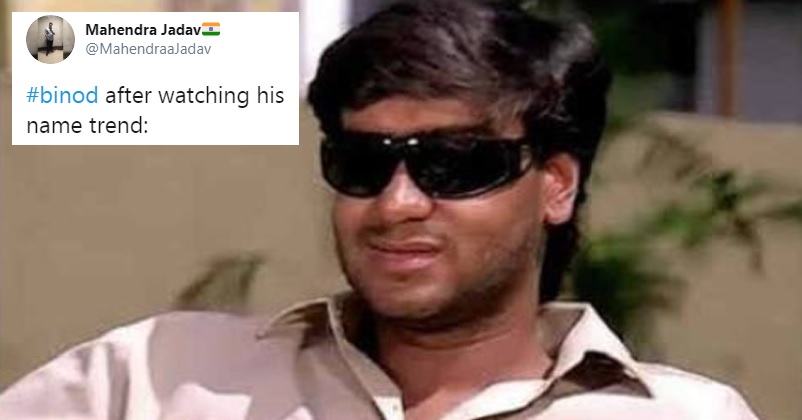 Internet has undoubtedly made our lives easy to a great extent but sometimes weird things also happen on the virtual platform. There has to be a reason behind whatever trends on the Internet but sometimes something starts trending and most of the netizens don’t even have an idea as to why it is even trending in the first place.

In recent times, “Binod” has begun to trend on the Internet and social media and while many people are not able to understand its reason, a number of memers have started posting memes and jokes on it. If you are still wondering as to why Binod is everywhere on virtual world, let us tell you that it all started after a YouTube channel named Slayy Point posted a video titled “Why Indian Comments Section is Garbage (BINOD)”.

Here is the video of Slayy Point after which Binod has become viral:

Since then, everything on the Internet is just about Binod and while earlier only memers were using it to make memes and jokes, now the corporate and the police departments have also joined the bandwagon.

This is how Mumbai Police reacted:

Dear #binod , we hope your name is not your online password. It’s pretty viral, change it now! #OnlineSafety

Dear #binod, we know you have gone very viral, But your safety is important. corona is more famous than you so stay home, stay safe.#SafetyFirst

See the reaction from Tinder India:

Here are some other tweets:

#Binod might not write anything else, but we do have a message for you! pic.twitter.com/1It1yZE7Tq

#binod after seeing this all pic.twitter.com/iQsEVmedeg

After seeing himself trending everywhere #binod be like pic.twitter.com/cjqgjcm69D

When someone asks why is this #binod trending : pic.twitter.com/WNdolFXbTs

#Binod
Our name is everywhere pic.twitter.com/uJYNHOpovt

Do you know any Binod? Tag him in comments!

“Aag Lage Basti Me, Launde Apni Masti Me,” Twitter On 2 Guys Floating In A Mattress On Flooded Road
“Paise Bhi Milte Hain?” Reacts Twitter As Someone Asks If They Got Paid To Do House Chores As Kids