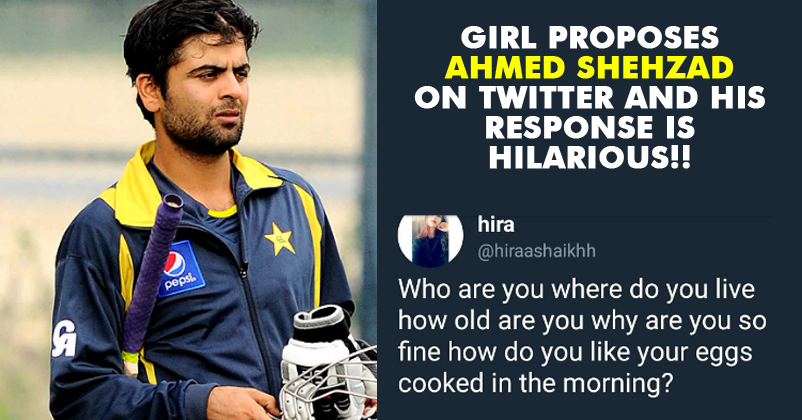 Social Media is a crazy place. You post anything here and it will get you response.

A Pakistani female Twitter user has been in talks recently for proposing cricketer Ahmad Shahzad and getting blocked in the result. The incident became popular on social media after she posted some screenshots of her proposal and Shahzad’s reaction. Here’s what she posted – Flirted with a married man?

You gave him respect that's probably wrong for him.. after being out of the team he thinks everyone is making fun of him

Hira who did all this just for fun was quick to realise that people are taking it seriously. So she quickly replied-

Truth behind the whole story

Actually, she didn’t propose Shahzad and he didn’t block her either. She just pulled a joke on Twitter users by creating a situation like a Swedish singer Zara Larsson, who proposed Brian H Whittaker on social media, and they ended up dating each other.

The joke was basically to convey that if she adopts her style and proposes someone like Shahzad, this is what would happen (Blocked). But people and even some media websites didn’t read all of her tweets and started reporting it wrongly.

Talking to indianexpress.com. 18-year-old Shaikhh confirmed that she was indeed pulling a joke.

“It was a joke honestly, he didn’t actually block me and I’ve said this very clearly in some of my tweets,”

Pakistani Fan Shared Sarfaraz’s Pic & Said “Who SRK?”! Got Thrashed By SRK Fans!
Remember Pak Fan Who Made Shami Angry With “Baap Kaun Hai”? Here’s What Indian Fans Did To Him!