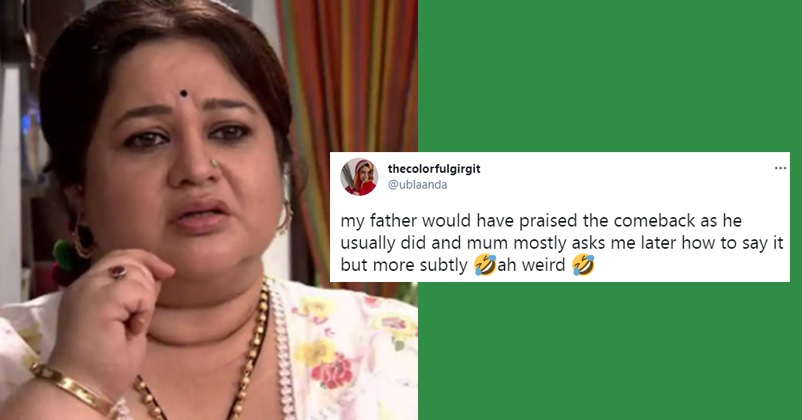 In the modern day world, people are very much conscious of not only their appearances but also the looks of others and there are many who don’t hesitate in making comments on other person’s appearance even without thinking that he/she may not like it or may get hurt because of their remarks. While skinny people have to face comments because of their less weight, many people in the world are fat-shamed because of being over-weight.

In simple words, whatever the case may be, there will be some people who will say something or other about your appearance so what you can do is to either ignore them or give them a perfect kickass response just like this girl who faced a comment from her mother’s friend about her weight.

Recently, a Twitter user whose id is @gemmniqua took the micro-blogging site and narrated the incident which happened with her. She told that as she walked into her house, her mother’s friend told that she put on some weight.

The girl was in no mood to remain mum and she gave a sassy reply by telling her aunt that she (girl) is also feeling the same for her (aunt). This response was quite a shocker not just for the aunt but her mother was also left in a state of shock while the girl’s father tried to avoid the aunt by showing that he is busy.

@gemmniqua tweeted, “I walked into the house and my mum’s friend said I put on weight. I replied wow, I was thinking the same about you. My dad was bussing up and my mum was in utter shock.”

I walked into the house and my mum’s friend said I put on weight. I replied wow, I was thinking the same about you. My dad was bussing up and my mum was in utter shock.

Moral of the story is if your a bad gal be bad everywhere. I’m bad AFFFFFF

The Twitter users also reacted soon and here are some of the selected tweets:

How our "elders" react when you serve them the same disrespect that they served you first pic.twitter.com/iP5RVP6jqY

This a good comeback, lemme note this

Why are people even comfortabel saying this to people like it's some sort of greeting like huh?!

And they get mad when it’s thrown back at them. It’s crazy

Why do our moms friends feel the need to comment on our weight vele??😒😒

Nice answer to people who are nosy.
I remember someone asking me if I am married, and I asked him in return if he has a daughter that is looking for a husband. That's how the convo ended 🤷🏻‍♀️

Let's learn to normalize stop commenting on people weight and appearance ,it's weird ! You never know what people are going through…the friend got what they deserved!

As you should! It’s so rude to point out someone’s weight gain or loss like why is that the first thing you think of

Your dad when he realized his genes were showing through you: pic.twitter.com/bmkdt3TEAP

The only appropriate reply to people who think they can have a say about your weight. https://t.co/6SmQlOXa4v

my father would have praised the comeback as he usually did and mum mostly asks me later how to say it but more subtly 🤣ah weird 🤣 https://t.co/poc9CT6ALR

An “auntie” said that to me as well & I hit her back with “oh, you don’t have mirrors in ya house?” & the other aunties looked at me in shock while a few of them giggled into their shirts LOL & then my mom tore me a new one but no regrets lmao pic.twitter.com/OdLV1iyl2A

Some people just don’t have a filter. My aunt told me “well you and your husband have gained so much weight.” I didn’t respond bc I was in shock that she was saying this when she is way over and over weight. I just gave her the eye like have you seen yourself🤦🏽‍♀️.

Moral of the story- Respect comes both ways, if you talk your shit imma talk my shit.

Nobody needs to remind the other person that he is over-weight or under-weight because everyone is aware of what is happening with him and this girl did give an epic reply to the unwanted comment. What do you say?