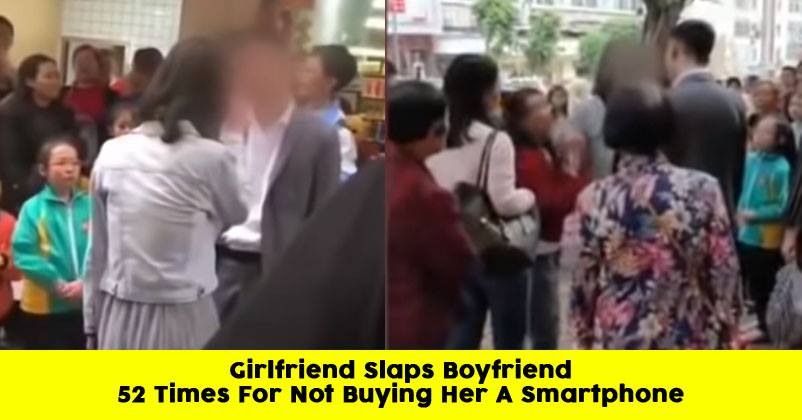 Love is the purest thing known to humans and it cannot be weighed by materialist things. But these days love can only be showed and accepted with the worldly things and if one cannot afford gifts, he has no right to love. A recent incident in China was the live example of the same and the video of the incident went viral.

A girlfriend got so angry at her boyfriend for not gifting her a smartphone that she lost her cool and slapped him in public. The girl slapped the boy 52 times for not giving her gift on Chinese valentine day. And the worst part is the boy allowed his girlfriend to take her anger out on him because he felt that he was in the wrong.

Reportedly the girl was supporting her lover since a very long time and when he couldn’t bring her a gift, she got furious.

When the police tried to take both of them to the station to sort everything out the boy, fearing that his girlfriend would get into trouble, stopped them from taking her.

Physical abuse of any kind and for any reason should never be justified.

5 Movie Stars Who Changed Their Names Due To Numerology
Rangoli, Kangana’s Sister Is In News Again. Takes A Dig At Karan Johar And Ranbir Kapoor Now