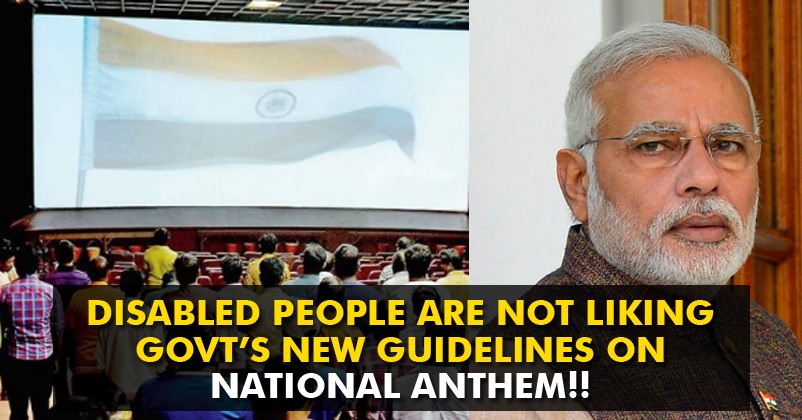 Ever thought that we could set parameters or instruments for measuring feelings? Feelings cannot be quantified on just a mere set of rules and guidelines. However, entertaining a slight possibility that it can, all of us agreed to stand up for the National Anthem of our country during the starting of movies in cinema halls that was recently ordered by our Supreme Court.

The Supreme Court’s order was for every single citizen of our country. Citizens who could simply afford to perform these duties. But not all of them can afford it. There are some who comes under the section of ‘DISABLE’ that makes it difficult for them to perform such task. Now my only question is that – Does the inability of a person to stand up for national anthem makes it look like he disrespects our country? Well, some people do think and hence, 44-year-old Avelino De Sa from Goa, a frequent moviegoer who suffers from cerebral palsy has now raised some few important points. He doesn’t mind for trying his best to stand up for the national anthem whenever it is played. He takes the help of his crutch to hold himself and tries his best to deliver the proof of his nationality for the next 52 seconds as per asked by our government.

However, the recent guidelines laid by our Government for the perfect posture for National Anthem has now disturbed and disappointed him. This is what he said, ‘According to the guidelines, we have to be alert when the anthem is played. What is alertness? How does one define alertness and who’ll decide what is alert and what not?’

According to the guidelines – people with locomotor disabilities and other wheelchair users, shall position themselves to the extent of maximum attentiveness and alertness, with or without the help of appropriate aids and appliances. Well, if a disabled person finds it hard to stand, should we shamelessly consider it as a lack of ALERTNESS from his side? His difficulties are not by choice but by his unfortunate fate. Now if the maximum attentiveness and alertness shown by them don’t seem pleasing to other people, do they possess the right to take law in their hands? The whole point is about relative feeling which is very dangerous. Salil Chaturvedi, who was attacked last year by a couple unaware of his spinal injury also shares the same thought. According to him, the planning committee of the government didn’t even consider to consult a disabled rights activist before coming out with such guidelines.

According to Avelino De Sa, it’s the duty of either the government or the cinema hall staff people to display a disclaimer before the national anthem plays that tells the rest of people in the hall that apart from them there may be some disabled people and hence one should not force them against their limits.

However, the matter will get worse for a person who will be mentally challenged as he will not be able to show any visible signs of disability before he speaks or expresses himself as people under such circumstances hardly give any chance for that. However, the guidelines laid by the government does say that a person with a mild intellectual disability, without associated conditions, can be trained to understand and respect the national anthem. Relaxation to such class of persons with disabilities may be considered But the whole point is to understand the person’s ability to learn and train. Every single mentally challenged person reacts differently to various teachings. So what do you think about the new guidelines laid by our Government? Aren’t they going too tough on this section of our society? Please share your opinion in the comment section below.

7 Common Misconceptions About Bihar That Should Seriously Be Debunked!
Sushma Swaraj Comes To The Rescue Of Parents Of Disabled Daughters! Here’s What She Did!