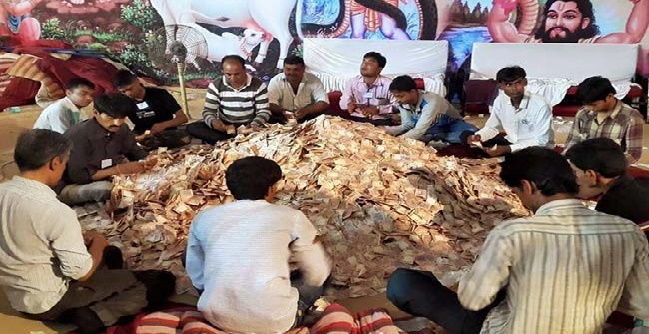 In the viral you can see a woman, BJP parliamentarian showering currency notes on ‘devotees’ dancing at a religious-cum-community event at the famous Bhalka Tirth in Veraval town of Junagadh district.

Poonam Maadam, who has the Jamnagar seat, was seen showering currency notes of Rs. 10 denomination on people who were dancing at the event held on 18th April, 2015.

When asked about her impromptu action which withholds the party’s name she said it’s a “long tradition” of Saurashtra’s ‘Lok-Dayro’ (cultural or folk event in the region) and the money was part of “donation” that would be used for the social cause. This was neither the first time that I took part in such a programme nor it would be the last time. It was not like distributing money, it was like a abhivadan (greetings). It is a tradition of Saurashtra for more than 100 years and it was a charitable event of Ahir community where more than two lakh people participated with good spirit and good faith,” she told the Press Trust of India.

She said the so called “Donation” will be used to build a hostel for girls and a gaushala (cow-shelter).

“People came there and they were very happy. They were very emotional on becoming part of that charitable event and I too take pride in saying that I was there in the Lok Sahitya event which is called ‘Dayro’ in Saurashtra. I am proud of it,” Ms Maadam said, adding that she participated in the function as a “daughter of Ahir community.” and not as a BJP representative.

“The programme was for the betterment of the community. Even some farmers also participated in it. A wrong picture is being presented that farmers are not happy. That is not true.

And it was desire of farmers and people of our community that I should take part in it. It was for the God and community. This is the place where Lord Krishna himself recited ‘Bhagwat’ in his last days and I immensely feel proud that I was part of such event,” she said.

Ms Madam said every community in the country should organize such events for their betterment. But When asked if she know how much money she showered today, the sociable BJP remained numb as she was herself unaware of it.