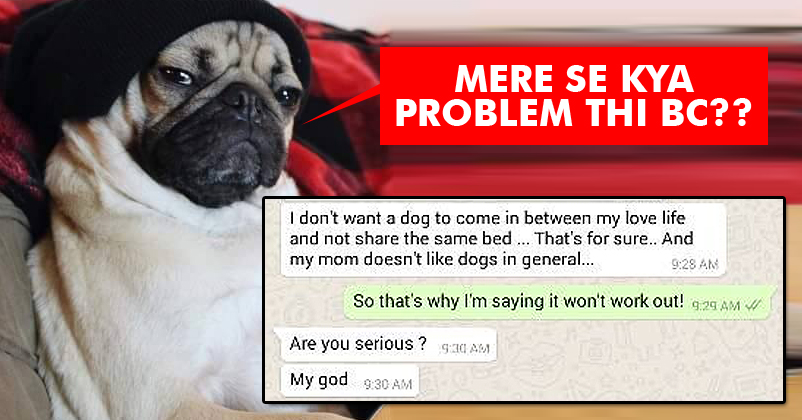 It is often said that a dog is man’s best friend. Dogs are amazing, they can cheer you up, bring a smile on your face Whether it’s when they are begging for your food, barking at their leash to tell you that it’s the time to take a walk outside, or simply when they greet you after you return home from a long tiring day. Dogs are more faithful than humans, their little things can make your day. So what would you do when someone asks you to abandon your beloved dog? Well on a personal level, I think you should just punch them right in the middle of their face. But not everyone does that, different people have different priorities. For some people their dogs are an integral part of their lives, much important than their jobs or marriage proposals. You’d say what kind of a person puts a dog over his goals and marriage? Well a good person does that, and anyone who asks you to abandon your pet is a wrong person.

This B'lore girl rejected a guy cuz he doesn't like dogs & wouldn't want one after marriage. U go girl! #TrueStory pic.twitter.com/N4NW6U8IiJ

Boy – Hey. I was expecting some response and even my parents were asking. What should I say ?
Girl – Hey, I thought we spoke about this. Dog is going to be an issue..So!
Boy – Hmmm .. can we think about a solution for this ?
Boy – I don’t want a dog to come in between my love life and not share the same bed … That’s for sure.. And my mom doesn’t like dogs in general…
Girl – So that’s why I’m saying it won’t workout!
Boy – Are you serious ? My god
Girl – Yep cuz it’s going to be an issue afterwards _
Boy – Are you sure about your decision? It may be a temporary phase in life when you like dogs. We are talking of your life here.
Girl – Yes I’m sure. Having a dog is definitely not a temporary phase. I can’t abandon my dog for Anyone.
Boy – I am sorry to say this. But please marry the dog in that case
Girl – See you don’t have to be arrogant just coz it didnt workout between us

This is what happened with a Bengaluru girl, she was all set to marry the love of his life. But when the guy asked her to leave her dog because he doesn’t want a dog to come in between of his love life. He even said that his mom “HATES DOGS”, so she should forget the dog for the sake of her marriage. But the girl said that he should forget about the marriage, it won’t work, and rejected the proposal.

The girl made her point straight and clear. But the guy didn’t stop there, he went further and said something really rude. He asked her to marry the dog! I mean there’s a limit dude. But one good thing came out of this experience, the girl was clearly set to marry the wrong guy. A guy who doesn’t respect her, a guy who doesn’t understand her feelings, and most importantly a guy who doesn’t have the balls to convince her mom for the love of his life. Kudos to the girl for standing up to what she believes in.

Here’s The Copy Of FIR Filed Against Kapil Sharma! He Might Be Jailed For 3 Years !
Bijli Ka Bill Tera Baap Dega? She Was Beaten To Death For ‘Leaving Geyser On’!