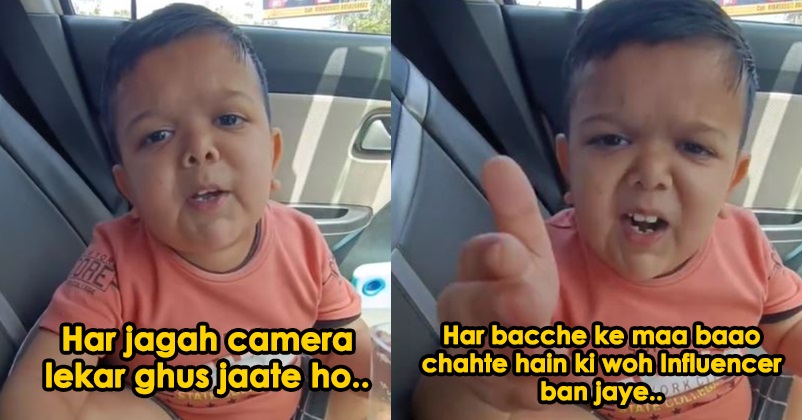 The social media platforms have become so important for people nowadays that they post everything about their lives and some of them are so obsessed that they leave no chance of making videos of their kids.

One such kid whose parents are pretty much into making videos and posting them on social media got quite upset with his parents and he schooled them in such a manner that it brought smiles on the faces of netizens. 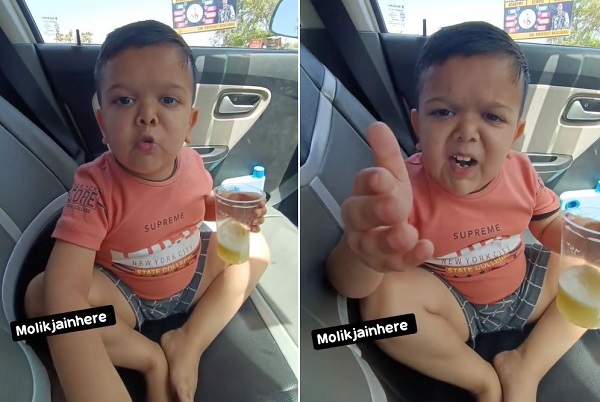 The name of the kid is Molik Jain and he was sitting in a car drinking a glass of sugarcane juice (ganne ka juice) when his father started making his video. Molik reacted in an angry way as he shouted, “Yaar kya hai yaar aapko? Matlab main kuch khata hun, peeta hun, har jagah aap camera leke ghus jaate ho. Mai kal potty ja raha tha tab bhi aap camera leke ghus gae. Har cheez main. Matlab kuch karne hi nahi dete.” (What’s the problem with you? I mean if I eat something or drink, you just come up with camera. I was in washroom yesterday and there too you came with the camera. It’s just with everything and you don’t let me do anything peacefully)

He further talks about the reality of the modern world as he says “Aur yeh mere sath nahi, har bachhe ke sath hota hai. Har bachhe ke maa-baap chahte hai ki woh influencer bane. Puri zindagi is camere me hi ghusa rahu main. Din bhar, video, video, video!” (And this is not just with me, it happens with every child. Every kid’s parents wants him/her to be an influencer. I’ll just be occupied with this camera whole life. Video, video, video all day long…)

After that, Molik asks his father in a cool manner to let him enjoy the sugarcane juice.

Netizens just loved this video and called it the best reel. While few asked whether it’s really ganne ka juice that he is drinking, others called him super cute and mature. Check out some of the selected reactions:

There is no denying the fact that what Molik Jain has said is absolutely true and he has narrated the reality in a humorous way!

Netizens Share Hilarious Memes For Parag Agrawal’s Job After Elon Musk Takes Over Twitter
Young Girl’s Father Troubles Her & Her Mother, The End Will Send Chills Down Your Spine