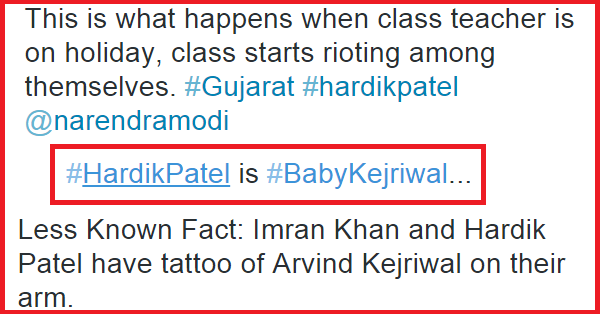 Patidar Anamat Andolan Samiti led by Hardik Patel has shaken up Gujarat with its violent protests. Hardik Patel is just 22 years old Commerce graduate who as per his claims is Sardar Vallabhbhai Patel’s follower and he is leading the entire community they make their one demand fulfilled of reservation for Patidar – the Patel community.

On Tuesday, Hardik was kept in lock up for a very short period as he stayed on the protest location for hunger strike for more than the time period for which he got permission. But this brief period was also too much for the protestors.

Protestors burnt the buses, burned three Police stations and the schools were shut down. The reports are coming that people were pulled out of their houses and thrashed in some parts of Gujarat which resulted in Curfew in Surat and Mehasana, the home district of CM Anandiben Patel, PM Narendra Modi and BJP President of Amit Shah.

Hardik has put all the responsibility of violence on the police and appealed his supporters through state television channel to maintain peace but he has been warning BJP that if their demands are not fulfilled then “the lotus won’t bloom in 2017.”

Hardik said this to a group in Ahmedabad, “If you do not give our right, we will snatch it. Whoever will talk of the interest of Patels will rule over Patels.”

He has also made a appeal on WhatsApp to maintain peace, “I make an appeal to maintain peace and keep calm. I give a call for Gujarat bandh tomorrow (Wednesday). This decision has been taken by Patidar Anamat Andolan Samiti considering widespread violence in the state.”

Police has halted the internet services on cells as a measure to keep a check on the spreading of rumors, which can make the situation further critical.

The social media is flooded with reactions and talking about Hardik Patel and his supporters as well as his relation with Arvind Kejriwal, the CM of New Delhi together with the claims that he is making; we are bringing some reactions from social media for you:

This is what happens when class teacher is on holiday, class starts rioting among themselves. #Gujarat #hardikpatel @narendramodi

#HardikPatel is another #MulayamSingh what he speaks is not clear

What terrorist couldn't do in GUJARAT, .#hardikpatel did it. u support him, UR anti National congr http://t.co/ViU8SORTbK

Looking to Hardik Patel – Ashmit Patel was found in a sad state hoping for reservations in Bollywood. pic.twitter.com/3zvtvffYKW

Parthiv Patel is hopeful today of getting back to Indian team . Thanks to #hardikpatel . #IncredibleIndians

#Patel is a rich caste,have their own business,educated, many of them r settled abroad.
From which angle they r backward ?#HardikPatel

Hardik Patel never fill petrol tank of his bike more than a litre so as to see the fuel indicator under reserve part : #YoHardikSoReserved

Less Known Fact: Imran Khan and Hardik Patel have tattoo of Arvind Kejriwal on their arm.

What are your views about the article? Share in your comments.

“If Pak Has Nuclear Bomb, Then Make Me LALU BOMB”, Says Lalu Prasad Yadav
This SRK Fan Tweeted Super Awesome Script In Which SRK Himself Is Damn Interested To Work