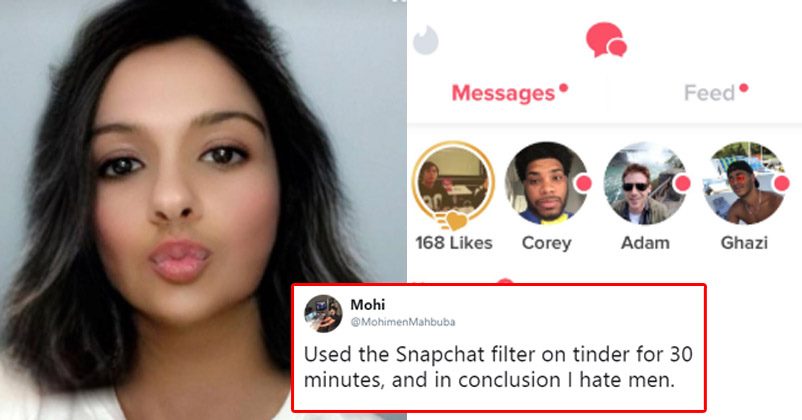 Snapchat the multi-messaging app which is famous for its variation of filters. Each one of us at least has one picture with the dog filter or face swaps. Snapchat was launched in 2011 but the application has oozed fame in the last 24 hours.

Netizens are going insane with the new filter released by the company a gender swap filter. Well, the netizens believe this is by far the best filter ever!

This mind-boggling filter turns a girl into a boy or vice versa. People will fail to a glitch in the filter by which you can assume the person has used the filter and doesn’t look like that.

The filter has created a new buzz in social media as the netizens are using it to prank people. Men are using it to create a female tinder profile taking pictures of themselves as girls.

I made a tinder for Ewald with the girl Snapchat filter and I guess a lot of guys thinks he’s pretty attractive 😂😂 pic.twitter.com/4EmfDgy7dx

Men have finally understood by using the gender swap filter to catfish guys up on Tinder. What women go through when they use any of the dating apps and how many creeps we face.

Snapchat just added a filter that turns you into a girl. This is almost too realistic I’m scared 😬 pic.twitter.com/tiWZOapdMS

Twitter is flooded with some of the hilarious gender swap pranks, have a glance at the best :

This Snapchat filter is Definitely a curse to male chromosomes. pic.twitter.com/784tOxGJ9q

I ended up making a fake tinder with the Snapchat filter and this took less than 10 minutes.

Lmaoooo I got bored and created this nonsense with these Snapchat filters 😂😂. We really cutting up pic.twitter.com/SS7VxfRVPx

Thanks to Snapchat, I no longer need a duo parter (also, clearly finals studying is going very well) pic.twitter.com/yT39BH72QM

Posing on Tinder using the girl snapchat filter and already been offered to travel around America with someone pic.twitter.com/84vbYZfZzP

My girlfriend’s jealous because her snapchat filter turned me into an Irish princess. I’m enamored, yet creeped out at the same time. pic.twitter.com/1Qg2IMegsg

This snapchat filter crazy I look pretty good as a girl pic.twitter.com/66RHpfLbTC

Continue Reading
You may also like...
Related Topics:Snapchat, Snapchat filter