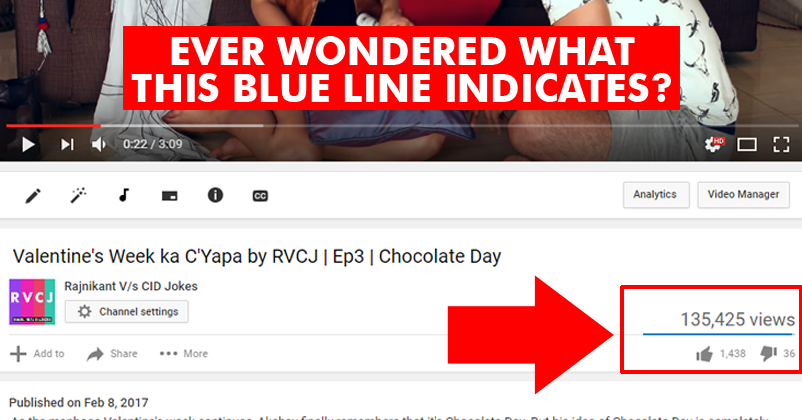 YouTube is undoubtedly one of the most visited websites across the globe. It is ranked #2 just below Google in the list of most popular websites according to Alexa Internet rankings. It was founded on 14th February 2005. Later in November 2006, it was acquired by Google for USD 1.65 Billion. After its acquisition, usage of YouTube has increased enormously and it made its way into more number of countries.

Individuals upload most of the YouTube content than the media corporations. With Google AdSense, individuals also have an opportunity to generate revenue with their content. And coming to the video consumption, YouTube offers content in each and every field. It has math courses, coding lessons, tips, tricks, reviews and much more. YouTube can be simply termed as a win-win situation for both users and video producers. Millions of people rely on YouTube for their constant needs of entertainment, tutorials, reviews etc.

Coming to the point, have you ever wondered what the blue line bar just below the view count in a YouTube video means? Here’s the hidden meaning behind the blue line:

To be honest most of us didn’t identify the blue line even after watching hundreds of YouTube videos. Well, not after this article. The blue line on every YouTube video gives the ratio of likes and dislikes of a video. For example, let us consider the above video; it has 450,347 likes and 49,376 dislikes in total which means it has 9.12 times more likes than dislikes. In other words, it can be considered as a success ratio. Longer the blue line, greater is the ratio of likes over dislikes. However, the blue line can be manipulated at times because it is generated solely from the viewers voting.

5 Records Of Sachin Tendulkar That Virat Kohli Can Break!
13 Movie Snacks From Around The Globe! What A Contrast In Choices!