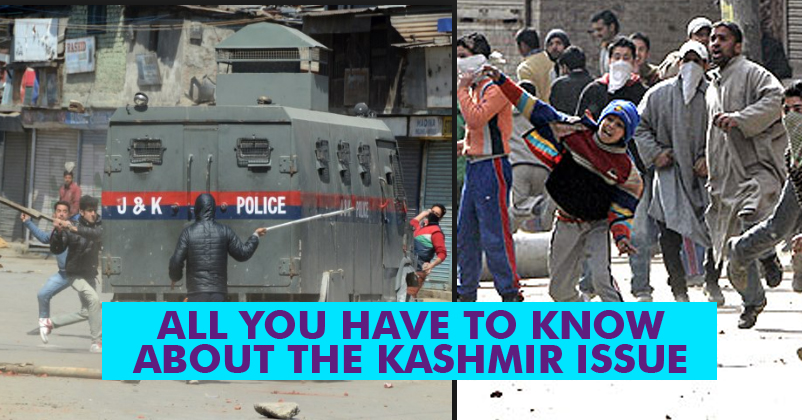 While the most parts of the world is at war, delved in various conflicts; India is not spared. This part of the country that is incredibly beautiful located in Himalayan mountains, Kashmir, is not yet at peace since the conflict began during partition that happened in 1947 when the country gained independence. This war, though not yet declared as one, has been going on for years and there still seems to be no end. And at present, we learn about their sufferings in news which is just endless – there is a permanent place for it in the daily. It tore Kashmir apart.
Ever wondered how did it all begin? How can a partition which was with the consent of both the countries lead to an endless war of this sort?

Here’s the story behind it.

Independence gained but the differences between the two religions, Hindu and Muslim, persisted which led to the partition of this country when we got independence and that gave birth to two countries, India and Pakistan.
Obvious conclusion: The division was on the religious lines. Partition led to division of states. Princely states which included Kashmir were free to choose where they wanted to belong whereas the other states were divided by the British. Also, India almost succeeded in convincing most of the princely states to choose India. Based on the religious lines, Kashmir should have been in Pakistan due to the majority of Muslims living there. On the demand of the situation, Raja Hari Singh, the then ruler of Kashmir, chose to belong to India.

What was the situation that turned the tables in favor of India? Pakistan itself did that. Pakistani tribesmen under the guidance of Pakistani Army; decided to invade Kashmir because the ruler wanted to remain independent of both the countries. But the invasion forced the King to approach India for military help. India denied to provide help until Raja signed the Instrument of Accession in favor of India. Finally, Indian armed forces blocked the invasion which led to the de facto partition of the countries. This war the first war between India and Pakistan -1948.

By this we can simply conclude that because the agreement was signed by the ruler in favor of the country, Kashmir belongs to India. It didn’t seem so simple to the Pakistanis and further arguments were raised that the ruler did this in the pressure of terror and not through his own will and so, the Kashmir cannot belong to India and the conflict began. The matter was taken to the United Nations by Jawaharlal Nehru for peace against the will of Sardar Vallabhai Patel who, if given a bit more time, would have conquered the whole of Kashmir. The UN decided for plebiscite and also conditioned that Pakistan must withdraw their armies while India reduce their number of troops. India was confident to win it because the terror created by Pakistan made the Kashmiris really unhappy. The plebiscite never happened because Pakistan never fulfilled the conditions and the conflict continued. 1957 when India officialy declared Kashmir to be part of the country and also included in Indian Constitution though the conflict still continued.
Ceasefire announced, peace for awhile until China came into picture. 1962 Indo-China war has it roots on this reason. Even China fought for Kashmir (ya, out of nowhere) and were successful to capture 20% of the region which is named as Aksai Chin. The year 1965 when fighting between India and Pakistan broke out again and several were killed while the sufferings grew. Fortunately, ceasefire was established and the Prime Ministers of the two countries, Lal Bahadur Shastri and M Ayub Khan, came to an agreement, to thrive for peace, on January 1, 1966. Due to them getting out of power, everything got back to where it was and the conflict still continued.

When Pakistan had an internal conflict with East Pakistan (now called Bangladesh), result of which, refugees increased in India. India marched into Dhaka, leading to a war-1971 where Pakistan surrendered and a new nation was formed – Bangladesh. This became the base of enmity between the two countries and thei 1999 The great Kargil war was waged across LOC, when Pakistani soldiers infiltrated Jammu and Kashmir and literally the US had to get involved to put an end to it. Though the war ended, the loss was irrecoverable and the area near LOC became subject to most of the sufferings but the conflict still continued. During 2000’s many attempts to maintain peace were successful but due the attacks in 2008 in Mumbai, the conflict continued again. Pakistan admitted that it was partly their hand behind the attacks, a militant terror group – Lashkar-e-Taiba from Pakistan. Also it came out that, Pakistan has given shelter Islamic militants and terror groups – Lashkar-e-Taiba, Ikhwan-ul Muslimoon, Al-Qaeda and Muslim Mujahideen. This led to terrorism and conflicts grew a lot more where end was not r>close. (Not yet). Since then, violent protests, cold war, curfews, terror attacks has made life miserable for the Kashmiris and still, there is no end to the conflict. The conflict has been persistent since so long that now, whoever wins, a question arises – Was it worth the sufferings of the people, the lives of the residents and the childhood of the Kashmiri kids? Yes, the soldiers might think that it is worth their life because they have committed their soul to the benefit of country but is it really worth?