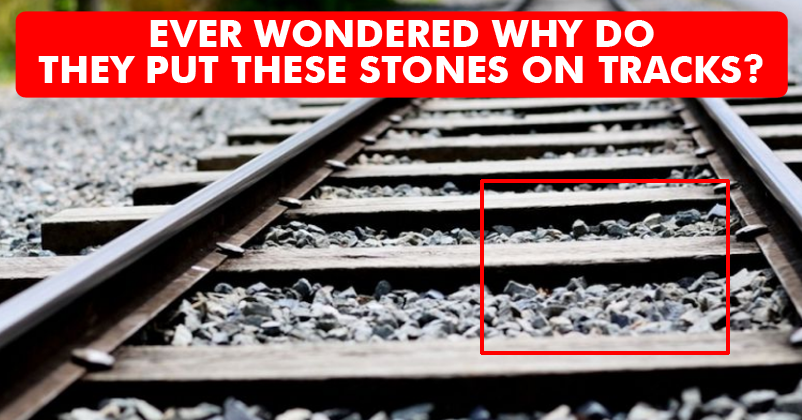 Railways is one of the most preferred types of transportation in India. It carries more than 20 million passengers every day. Indian Railways is also a home to more than 1.6 million people. Railway tracks are essential parts of rail transportation. Indian railways comprise of over 1,15,000 km of track across the country. Despite knowing that it is dangerous to cross the railway tracks, many of us have done it and are still doing it. Well, nothing much can be done about it but did you ever notice the stones which are lying alongside the railway tracks? Have you ever wondered why these stones are placed alongside tracks? Here’s the reason behind it:

The crushed stones that are present alongside the railway tracks are collectively known as track ballast. The railway tracks are made up of steel and are supported by wooden ties (used previously) or concrete rectangular slabs which are known as sleepers. Sleepers are also known by other names like cross-tie, railroad tie and these are used to a greater extent presently. Railway tracks are normally subjected to heat expansion and contraction, high-speed movement of trains, vibrations etc. Tracks should withstand all these factors for a safer journey. In order to do this, crushed stones are placed between the sleepers (or wooden-tie) and also around the tracks. The crushed stones are capable of keeping the wooden sleepers in place and they will, in turn, hold the railway tracks firmly. The stones should not be smooth because they may slide over each other when the train is passing over it. So, stones with rough edges are used. Crushed stones also serve other purposes like – draining of water beneath and around the tracks, stopping the plant growth to a certain extent and more importantly, holding the tracks firmly even in the case of super heavy trains.

#ISISupporterBJP Is Trending On Twitter After BJP Volunteers Found Spying To ISI
This Teen Took His 5 Year Old Sister For Dad-Daughter Dance! Reason Will Make You Cry A Lot!