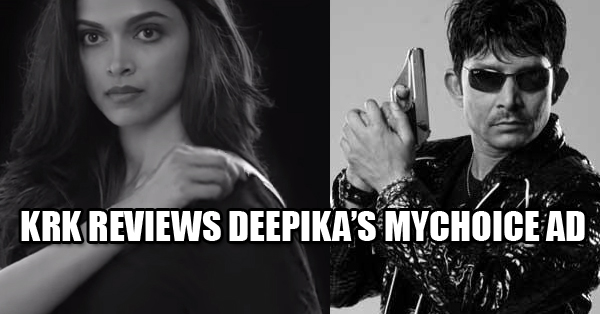 He abuses others, he makes fun of others, he may be a prick, he is famous for his illogical, senseless & rude reviews & statements over the past but I bet you will agree with him this time.
KRK yesterday announced to release a review on Deepika Padukone’s MyChoice Advertisement, has released a video on his Youtube Channel today. And believe it or not this time people like the way he came out with his opinion.
KRK in the video clearly puts forward his opinion that if Doing anything & everything is a Women’s choice and she in no way should be blamed for her actions, talking about gender equality, even Man has his own choice and shouldn’t be questioned or blamed or Judged or in no way shouldn’t be called as womanizer or racist or anything because When It is Her Choice.. It Is Even His Choice…
In the entire video he takes a dig at Deepika & Director Homi Adajania and stresses on the fact that Women Empowerment is not just about Sex, Smoking or Drinking or Partying but there are 1000’s of other things women should be strong in. This Time and for the first time take

If you haven’t seen Deepika’s MyChoice Ad yet Watch It Here:

What do you think about this review? Was KRK talking Sense this time? Feel free to share your views in the comments box below:

Kamaal Karte Ho Khan Ji, Declares To Make Out With A 16 Year Old- His Choice
10 Inspirational Quotes By Sachin Tendulkar Which Will Explain You Why He Is The God Of Cricket!!