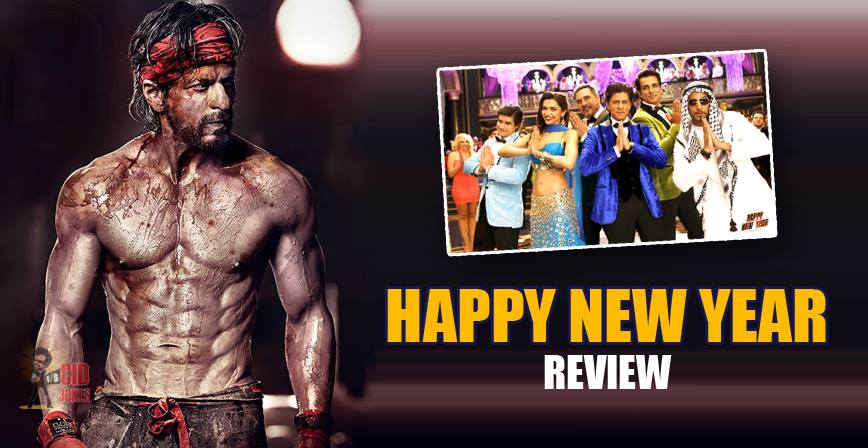 Hello peeps! This week onwards, we’re starting a new section where we review movies before you go to that theatre near your house!

There isn’t a better way to start than by reviewing, probably, the biggest movie this year, Happy New Year!

So the big Diwali release is finally here! Happy New Year released today. And with so much hype surrounding the movie, I had to go give it a watch on the first day.
And I’m pretty surprised with how the movie turned out! “Good” surprised or “Bad” surprised? Well I was “good” surprised.

I’ll be frank. The trailers of the movie didn’t look too promising. After “Tees Maar Khan”, I was skeptical about watching a Farah Khan movie. I like Shahrukh, but I was in doubt that the movie will be any good.
Once the movie began, all that was forgotten. The movie isn’t indicative, in any way, of cinematic excellence.

But it was fun! I’ll give it that. And oodles of fun. Not just a scene here and there.

The story feels like a completely Indianized and a not-subtle-at-all version of the Ocean’s movies. And it covers every possible area we Indians love! Patriotism? Check, Dance and Music? Check. Loads of Comedy? Check. Oomph? Check. Wholesome family entertainment? Check. There’s everything in this movie that we love. And I am certain it will break numerous records in the box office!

Also, if you like special appearances, this movie is filled with them! Anurag Kashyap, Dino Morea, Sajid Khan, Vishal Dadlani, Sarah Jane-Dias, just to name a few! Especially Anurag Kashyap! He is a hoot!!

Shahrukh is in top form as usual. He lights up the screen with his presence. His intensity is bound to make the girls weak in their knees. Deepika also produces a fine performance as Mohini, the clean at heart bar dancer. She picks up the Marathi lingo perfectly and delivers a strong performance. Sonu Sood and Boman Irani also produce a good performance as their respective characters. Boman has always been an amazing actor and it shows.

Abhishek Bachchan is the surprise package for me in this movie. He seems to have shed all inhibitions as Nandu, the effervescent drunkard. He is top notch and generates a lot of laughs!

I was a little disappointed by Vivaan Shah. I had a lot of expectations from him since he is the great Naseeruddin Shah’s son. But there’s not much for him to do in the film. And whatever he does do, seems a bit off. But well it ain’t easy performing when your Dad is as good as Naseeruddin sir.

As for Jackie Shroff, he’s done his bit well. Could it have been better? Yes. Was it bad? No. So it’s fine.

Anupam Kher is reliable and he does his bit very well.

The music is good, not the best, but there are some songs which you will definitely enjoy! I personally liked “Lovely” and “Manwa Laage”

The Choreography is good, without a doubt. After all, it’s a Farah Khan movie! I was pleasantly surprised to see Boman and Sonu dance well! All credits to the choreographers for that!

Now for the cons in the movie.

One thing I did not particularly enjoy in this movie was continuity. Some scenes are sewn together perfectly while some do not have any connection at all. This made the pace of the movie suffer at times.
Also, the ‘revenge’ angle was made to look like a menial thing at times which is a little weird since that is all the movie is about! I would have loved to see Shahrukh play his role in the whole movie with the same intensity as he had in the beginning. But sadly, he became a bit mellow in the second half. These are very minor issues though and do not affect the movie much, if not at all. Final words, I’d say go for it. It is one of the few movies in the past few years which, to an extent, has lived up to the humongous hype that it generated! Don’t judge it by the trailers since they are a little misleading. It is a lot more fun than it seems in the trailers!

If you can get a ticket, which is a very difficult task at the moment, go watch it now!
Is it the best movie this year? Not even close to it. Will it entertain you? Definitely!
Comment and tell us how much you enjoyed the movie!

Continue Reading
You may also like...
Related Topics:bollywood, movie, reviews