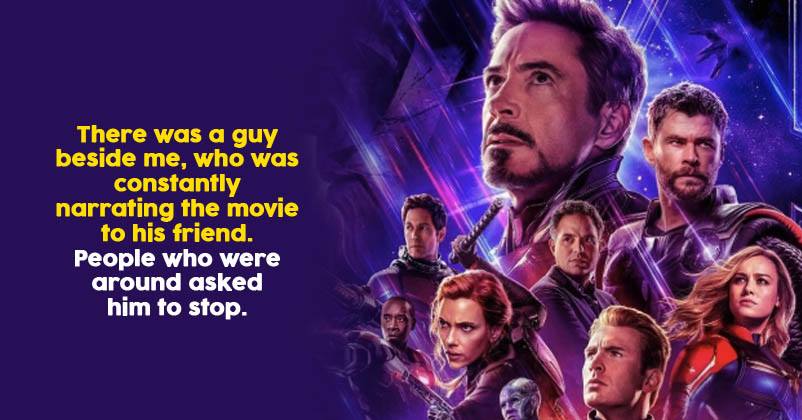 “Avengers: Endgame” is definitely something more than a movie as the impact that it is making on the audiences is huge and difficult to be explained in words. The superheroes stood together to fight their biggest enemy in the film but their major power was not their weapons but instead their friendship that always gave them the much-needed confidence even when they were down and out. The magnum opus is making viewers cheer, scream, laugh and cry, letting them experience a variety of emotions at the same time.

A Facebook user from Kolkata has shared a heart-touching incident witnessed by him, which is bringing tears of joy in everybody’s eyes as this is a perfect tribute to the friendship of Avengers superheroes.

In the interval, it was noticed that the person to whom the first one was narrating the film is blind. After talking to them, people came to know that the blind person lost his eyes in a bike accident just after watching “Thor: Ragnarok”. Since then, the first guy watches every Avengers movie first and then narrates the whole flick to his blind friend in the second visit.

In the second-half when the first person was narrating the movie, the facial expressions of the blind person were changing as if he was watching the film in his mind or visualizing it scene by scene.

“Today was the third day I went for the Endgame. Didn’t find anything new in the movie, but found something worthy of sharing.

There was a guy beside me, who was constantly narrating the movie to his friend. Since I saw the movie twice, I wasn’t finding any issue with it, but people who were around asked him to stop. During the interval we all noticed that the guy he was narrating to is blind, after talking with him we came to know that he lost both of his eyes in a bike accident just after Thor: Ragnarok. Ever since this guy who was narrating watches every MCU movies at first, then takes his blind friend to movie and narrates him the entire movie. During the second half of the Endgame, we all witnessed how dramatically he explains the scenes to friend and his friend’s facial expressions changing from time to time. The aggression, the smile, the tears, Tony & Nat’s situation & Thanos’s defeat seemed so alive in his face.

Well, we all have lost our words to praise his friendship and their fandom for MCU! Long live their friendship. Thank you Anthony & Joe for letting us witness this. 💝🌸”

We are left speechless after knowing about this incident. What about you?