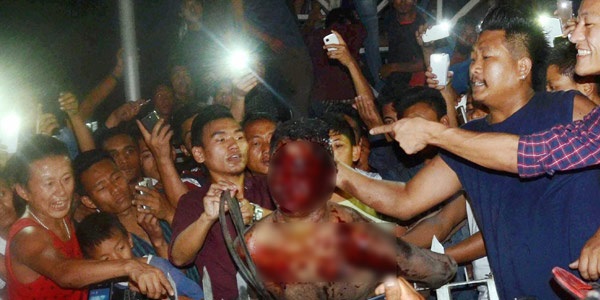 The accused rapist who was lynched by mob succumbed to death. However, the unofficial reports suggest that the alleged victim was not raped. The man who is a Muslim named Sharifuddin Khan was dragged out of the jail and killed and then burnt in Dimapur, Nagaland.

He was accused of being a Bangladeshi had raped a Naga girl. However there are two stories that are doing the round. The first part of the story suggests that the person was an illegal Bangladeshi immigrant, which has been proved wrong as the person is from Assam whose father has served the Indian Air Force and has two brother who are currently working in Indian Army. He has lost one of his brother in the Kargil War defending our country.

The second part of the story which is being circulated says that he raped the girl in a car after drugging her. Then took her to a Hotel where he again raped her. But the CCTV footage shows a completely different story. It shows that the man walked alone in the hotel and then the women followed him. The unconfirmed part of the story is that the girl demanded 2 lakh rupees from the man which when not paid, she made charges of rape against him.

On a shocking twist, the brother of the accused Jamal Uddin Khan said to NDTV – “Is the Nagaland government running a jungle raj? The girl who filed the rape complaint was my brother’s wife’s cousin. Nagaland police have said that the medical reports say she was not raped”

There is also one story in social media that few political outfits mobilized the crowd as they wanted to pass a message to Non-Naga Muslim people settled in Dimapur by killing this men.

Whatever is the real story it should come out soon and made public. Few are saying “Medical examination of the girl is yet to be done and the perpetuator should be brought to justice.”

UPDATE AS OF 10 PM – Nagaland Police’s Dimapur Range IGP Wabang Jamir told TimesOfIndia, “The medical examination performed on the victim confirms that girl was raped. Some injuries have been found on her hand and doctors have sent samples to forensic lab for tests. The investigating officer has also sent her undergarments for forensic tests. She has told the doctor that she was raped twice.”

Another thing to be taken into consideration here is that two of his brothers were in Indian Army. Another brother had died in service during the Kargil War. His father had retired from the Military Engineering Service (MES) of the army. A person from Army background cannot commit this heinous crime. However all these things are speculations and in reality no one knows the truth behind this case. Brother of the accused said to NDTV that medical report is clean. Nagaland Police is now saying Medical report confirms rape. Some people are saying Girl was raped and some are saying she was not. No one is sure about actual story behind this case. One thing is surely proved after this incident that people have lost their faith from the Indian Judiciary and are going to any extent. Moreover, the failure of the Central Jail security to protect the inmates has also came into the limelight.

What do you think that the people has lost their cool when it comes to injustice towards women? Everybody has trapped in this biased judgmental attitude? Is men always on the wrong side? Please share your views in the comment box below
This Dimapur Lynching case has shed some light in to the matters which needs to be take care of.