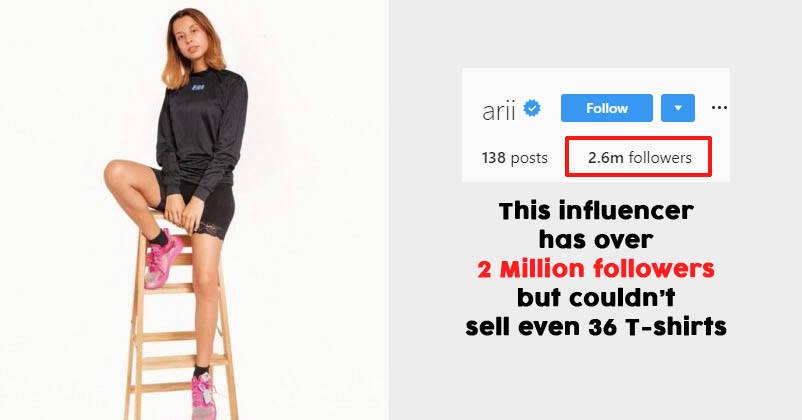 An Instagram influencer named Arii has 2 million followers online and still, she failed to sell 36 t-shirts for her company. The 18-year-old Instagrammer endorses clothing brands through her page to live a lavish lifestyle.

At a very young age, she has learned to earn in a very creative way. But her technique backfired when she tried to sell her own product. After failing to meet her target of selling 36 t-shirts she wrote a heartfelt note.

“Unfortunately, the company that I’m working with goes based on your first drop sales.
In order for them to order and make my products (even to keep working with them), I have to sell at least 36 pieces (knowing I’ve become super irrelevant, I already knew it was gonna be hard) but I was getting such good feedback that people loved it and were gonna buy it.
No one has kept their word so now the company won’t be able to send out the orders to people who actually bought shit and it breaks my heart.”

She later deleted the post but the damage has already been done as very soon it went viral on social media and started a debate about the role of influencers and followers.

The influencer bubble is bursting. This young lady has well over 2 million followers and couldn’t sell 36 shirts. Focus on genuine engagement and not followers cuz they ain’t gonna buy a thing. pic.twitter.com/uOSVxc2k4D

“I’ve supported everyone’s music or whatever” – sounds like the kind of fan I’d want for my art 🙄 you really do get what you give, and you have to have gratitude and a sense of wonder—you gotta have fun and not be grabby or entitled. Great example here of how things unfold.

skimming her ig, it looks like she just didn't have a real "brand" other than taking cute photos of herself, there was no videos, no comedy, nothing inspirational. i thin she mistook people liking her aesthetic as "a brand"

well, one problem is that it's an ugly shirt

Part of the problem IMO: the captions don't tell me anything. It's just a bunch of generic phrases you might find on a bumper sticker, and then zero hashtags. The tags are one of the simplest forms of marketing on IG.

The truth is that her followers aren't her customers.

Understanding who will actually buy from you and what they will buy is a key business lesson.

I just checked out her insta and it was super dry. Photos, captions. Barely any engagement. Can’t feel her personality. Overall boring.

An influencer w/ 2.6 million followers launched her fashion brand. She now says she failed to sell more than 36 units.

Look at her feed vs her product line. These aren't even close to the same aesthetic.

If you can't imagine her wearing any of these, why would her followers? pic.twitter.com/5CdEdxKUjf

Maybe I missed her IG Stories or promoted posts, but looks like she announced w/ video, only put up one more video, then said she failed 13 days later?

Not one single pic of her in product.
Only two posts even about it?

She basically didn't even try to promote her own product. pic.twitter.com/W28NAd1ogM

There's something fishy here tho.

At 2.6 million followers, 36 units should've been easy, no matter how bad the product is – she presumably has 36 crazy diehards who'd do anything for her.

Her two most recent posts have good, real engagement. She definitely has a bunch of real followers.

Does she have 2.6 mil real followers? That's up for debate, as these engagement # are low for 2.6m. But she definitely has enough real followers to sell 36 of literally anything. pic.twitter.com/oNZJX3tdqR

This Viral Painting Has 40 Ads Hidden In It. How Many Can You Spot?
12th Fail Fake IPS Officer And Motivational Speaker Arrested By Police