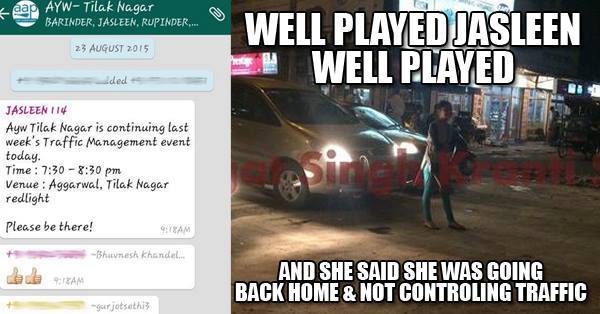 A new revelation is made in connection with the case of Jasleen Kaur who alleged that a guy name Sarvjeet Singh abused and threatened her when she said that she will file a police complaint against him. Well, the guy suffered a lot and there is not the least doubt about it but at the same time, we have considered the aspect of his being innocent too and brought each and every single detail with regard to this case before you.

Now here’s once again a proof which shows Jasleen wrong and hence proves that Sarvjeet is speaking a truth. Till now, Jasleen has been saying that she was going home and on the way, this guy misbehaved with her; whereas on the contrary, Sarvjeet had an utterly different statement. According to him, she was controlling traffic and started arguing with him for simply no reason. We did not have any concrete proof of who is telling a lie and who is correct but now, social media has brought some shocking pictures into view which can give this case a new twist and if they are found true, Jasleen will really have to find a space to hide herself as it will be a very disgraceful thing on her part.

Firstly, we want to make it clear that RVCJ Team does not guarantee this proof and has not checked its authenticity; however, since we have shown you all the minute details about the case, we just couldn’t miss this one too which we found on social media.

A Twitter user tweeted this and thrown a new light in this case, which can completely twist it (this image of Jasleen controlling traffic is of 16th August but this proves she was part of traffic control volunteer group):

Here’s again a picture that you would surely want to check out: After taking a look at these pictures, it becomes clearly apparent that Jasleen was not going home but she was controlling traffic and what Sarvjeet said is true….

Now I leave this decision on you to find out who is right and who is wrong!