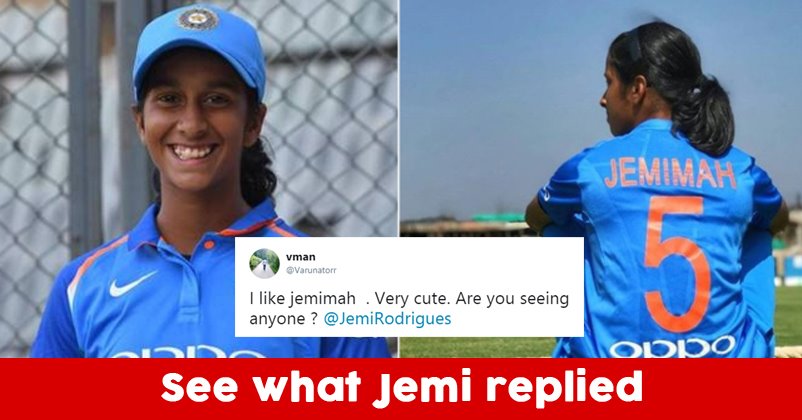 Jemimah Rodrigues the rising star of Indian Women Cricket team. The youngster is quickly emerging to become the finest all-rounder. Jemimah has taken the world cricket under her wing with her bold batting strategy and out of the box confidence.

My first 50 in the IPL. This was indeed a special one (: . #wipl#cricket#WomensT20Challenge


Jemimah rose to fame last year in February when the cricketer secured a place for herself in the Indian Women Cricket team and she made her debut against South Africa. She earned her place after the magnificent season 2017 -2019 in the state cricket team. She scored a whopping 1013 runs with Mumbai Under 19 team with 5 centuries and a double century.

All the training, sweat and hard work can't compare to the Honour and Pride in wearing our National Colours. A Bold new Jersey. A Bolder Team India. #bleedblue #teamindia


The 18-year-old cricketer is the only women to cricketer to have hit three consecutive sixes.

Jemimah is growing by each passing years and in the last session 2018, she was ranked no 6 in the ICC T20 ranking.

Jemimah recently played in the women IPL for Supernovas with a great knock she helped the team win the Women T20 Challenge. During the final match of Women IPL Supernovas vs Velocity. Velocity stumbled chasing 142 runs and was defeated by Supernovas by 12runs.

What a Game! What a Series! An incredibly thrilling exchange! Outstanding stuff from our team, the #Supernovas, right from our Keeping to our Bowling and Batting. And hats off to team #Velocity who stood up to the challenge and gave a brilliant fight right up to the end!! And man! The kind support we got from everyone who came to cheer us today and who were watching us LIVE was truly overwhelming! Couldn't ask for a better FINALE to the #WIPL! . To new Beginnings 🥂 . #thankful#ipl#WomensT20Challenge #playeroftheseries


Jemimah scored a magnificent 77 runs not out off 48 balls against Velocity in the finale. The youngster’s knock was praised by everyone. A boy took to his twitter account and asked if she was seeing anyone or not.

I like jemimah . Very cute. Are you seeing anyone ? @JemiRodrigues

Jemimah gave a befitting reply to the fan which he is going to remember forever!