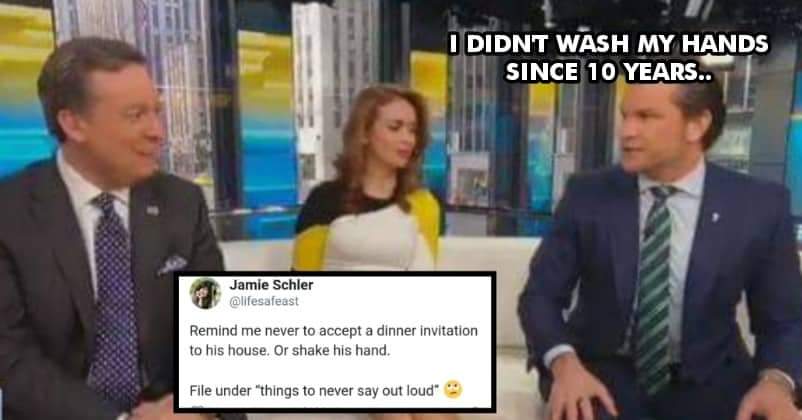 There IS such a thing as too much information, and maybe it’s okay to keep some things to yourself. For instance, harmless trivia about what you do to maintain basic hygiene.

But clearly, no one told Pete Hegseth of Fox News who made a complete fool of himself when he ended up confessing something extremely personal on national television.

He was in a conversation with two other people, when he said very confidently that he has not washed his hands in 10 years. He also mentioned he did not feel the need to.

Fox News’ @PeteHegseth admits, unprompted, that he hasn’t washed his hands in 10 years.

“Germs are not a real thing,” Pete says. “I can’t see them, therefore they’re not real.” pic.twitter.com/9hsAb9YA9j

He said he did not believe in germs for he could not see them and thus they did not exist for them. This was definitely a confession we had not asked for, and to be honest, this is pretty disgusting.

We thought so too, but clearly not.

In fact, we’re shocked that people agree with him:

Just because you can’t see bacteria, doesn’t mean they’re not there! :/

This is E Coli. This is what you are spreading every single day that you don't wash your hands. #WashYourHands pic.twitter.com/xqReDStXvg

I used to think that refusing handshakes was going too far, but now I’m reconsidering. pic.twitter.com/qeiWkPpswg

LOL, that’s what I was focusing on when I played the video again!

So since he can’t see his brain, IT doesn’t exist?

Please, guys. Don’t follow his example. We urge you.

Continue Reading
You may also like...
Related Topics:Journalist, wash hands

WEF Talks About Health Benefits Of Moringa. Desi Twitter Says “Tell Me Something I Don’t Know”
What Happens When Your Boyfriend Has A Female BFF? You Simply Can’t Miss This Hilarious Video