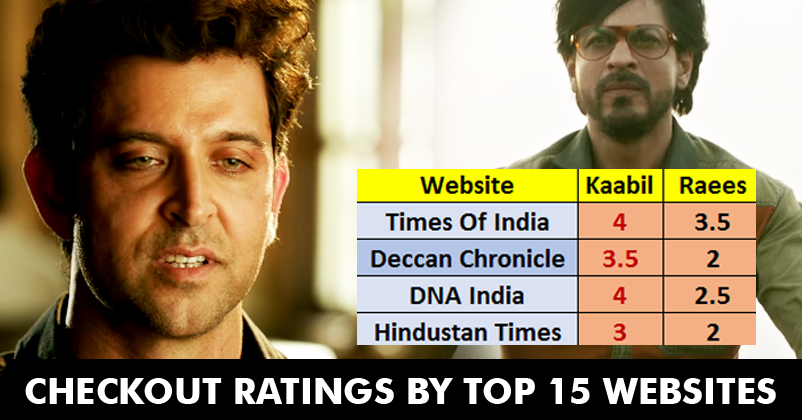 The debate between “Raees” and “Kaabil” has matured from the promotional phase to actual facts. Everyone knows that both the actors left no stone unturned in promoting the movie in the best possible manner; while Rakesh Roshan held special screening of Kaabil for all industry people, SRK’s rail publicity stunt helped Raees gain good media attention.

However, when it comes to ratings of Kaabil and Raees, the Hrithik starrer has managed to take the lead. Raees got favorable reviews from public, but Kaabil has won hearts of both the critics and public alike. Many leading websites have compared both the flicks; out of top 15 websites that we analyzed, around 7 of them have given 4 stars to Kaabil, which is a good sign of consistency. On the other hand, Raees has got 4 stars from just 3 of them. SRK couldn’t manage to touch 4; ratings on majority of websites range from 2 to 3.5 stars, which shows it is average.

People have argued that Raees has a simple plot but SRK has managed to add some glamour to it. This combination of simplicity and glamour isn’t appreciated by many and on the contrary, Kaabil has sailed smoothly; thanks to the plot, synchronization and Hrithik’s performance.

Ratings won’t have much impact on the collections; although Raees hasn’t got higher ratings like Kaabil, SRK’s star power won’t let the figures stoop low. Even Happy New Year and Om Shanti Om had not got good ratings, but still they were super-successful at the Box Office. We are telling this from the fact that advance booking figures of Raees were higher than that of Kaabil.

Let’s not support any movie; compare the chart and take your decision… Makers of both the movies have worked hard; we are no one to decide the fate of the movie. It’s not necessary that if low ratings are given, you won’t like the film. You might be having your own taste; so choose whatever you like. This comparison chart was just to help you make an informed decision.