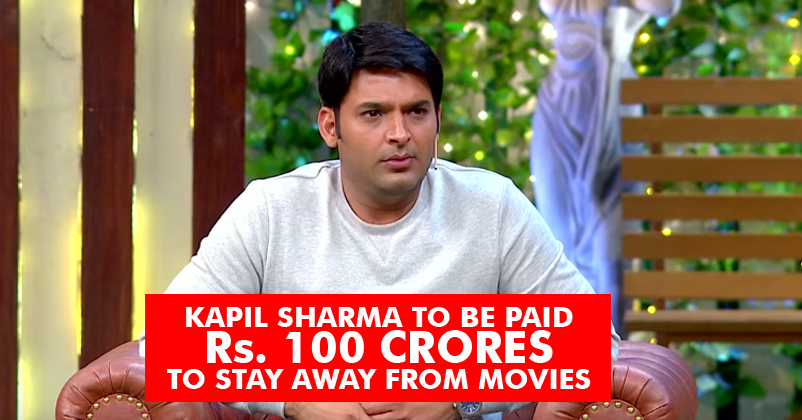 Kapil Sharma doesn’t fail to tickle our funny bone with his comedy show on Sony TV, “The Kapil Sharma Show”; the comedian entered Bollywood in 2015 and made his debut with “Kis Kis Ko Pyaar Karun”. Currently, he’s working on his movie “Firangi” and is leaving no stone unturned to promote it on his show, LOL!

Kapil has become very successful over a period of time and is flooded with offers. His fans are quite eager to see him in films, but as of now, he’s not at all interested in taking up anything. You might be wondering as to what is it that’s stopping him from concentrating on movies, right? Well, it is the Sony TV contract which has created this boundary. According to reports, Kapil Sharma’s contract with Sony TV has been extended till 31st December 2017 and he has been paid a whopping 100 crores for the same.

Due to this contract, Kapil isn’t allowed to take up films; does this give us a hint that Firangi will be delayed?

“Kapil has been signed on by Sony for another year. His contract has been extended till 31st December, 2017 and he has charged a whopping Rs 110 crore for the same. The makers agreed to pay him that much only on one condition. That he will exclusively remain a SONY talent for that much time and he won’t start shooting for anything till they allow him to do so.”

This contract is favorable for Kapil as well as Sony TV; if Kapil gets 100 crores from Sony TV itself, why will he concentrate on films? Even if he does 2-3 films in a year, he won’t earn this much. On the other hand, even Sony TV is safe that Kapil will exclusively work for them. If this news is true, we probably won’t get to see Kapil in films at least for a year. What do you think? Are these rumors or has he really signed a contract like this?

Do share your views in our comments section below.

Here’s How Kapil’s Ex-GF Preeti Simoes Reacted To Kapil’s Affair With Ginny!
Kapil’s Official Statement On Fighting With Sunil Grover! You Must Read What He Said!