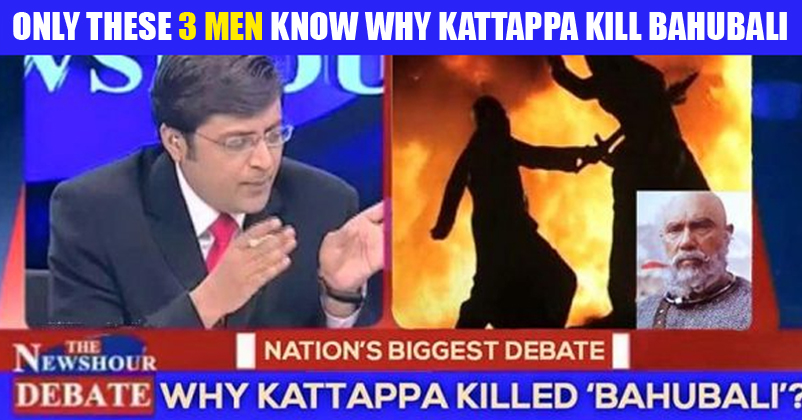 On 10 July 2015, all the citizens of our country were united and for the very first time after the Independence of India, they together asked a question. And with that our Arnab Goswami with his strong firm voice gave his trademark dialogue – ‘India Wants To Know – Why Kattappa Killed Baahubali’. Although this time he made some sense, India does wants to know ! ! This very question had stormed the Internet with it’s hilarious Memes, Tweets, Trolls and what not. Every second joke had this pun but the mystery still wandered in thin air. But not now, as on 28 April 2017, we all will be getting that answer that he had wished for, when Baahubali – The Conclusion will hit the silver screen. The movie is almost complete and this heavily guarded secret has just been filmed few days ago where only three people in this entire world know the answer.

And those three people are the Actor Himself i:e Prabhas, The Writer K.V. Vijayendra Prasad and the last is the director of the film S.S. Rajamouli. So go ahead, ping them, tweet them and just ask them that Why Did Kattapa Kill Baahubali ! ! May be you are lucky enough to get the answer.

Continue Reading
You may also like...
Related Topics:answer, Baahubali, Bahubali, katapa, kattapa, killed trolls, question, why, Why Kattappa Killed Baahubali - Only These Three People Know The Answer - Any Guesses ?

7 Upcoming Bollywood Biopics That We Just Cannot Wait!
So This Is The Reason Why Priyanka Chopra Won The Miss World Title 16 Years Ago