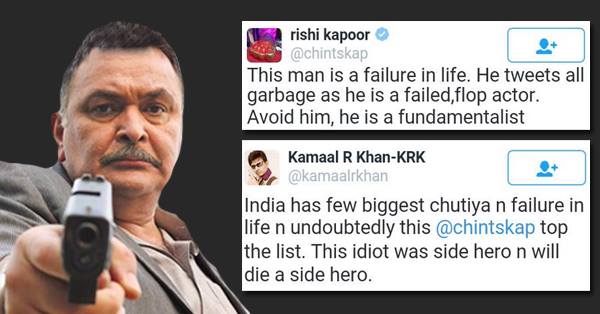 Kamaal R Khan has always been in the news for his inappropriate comments on the celebrities. It was some time back, when he sent a message to Karan Johar on Twitter which made rounds on the internet.

Yet again, Kamaal R Khan pulled an inappropriate comment on legendry, Rishi Kapoor calling him a loser. It all started when account known as “Father OF KRK”, which trolls regularly on Kamaal R Khan, referring him to be his son.

This further led to a steaming argument between Kammal R Khan and Rishi Kapoor. It did not stop with exchange of just few tweets, Rishi Kapoor even landed up reporting the tweet to the concerned authorities.

When Karan Johar & Shah Rukh Khan where exchanging tweets regarding the shoot of the movie “Court”, “Father Of KRK” tweeted this:

To which Rishi Kapoor wrote:

This man is a failure in life. He tweets all garbage as he is a failed,flop actor. Avoid him, he is a fundamentalist https://t.co/HZVMweI0JQ

And then Kamaal R Khan tweeted:

Finally Rishi Kapoor took this to the concerned authorities

Reporting this to the Twitter officials for foul language https://t.co/6sfUVgaiw7

Is there any message you have for Kamaal R Khaan on this? Do let us know in the comments below: