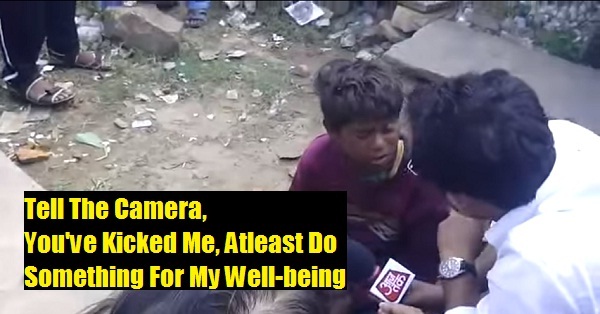 Just few hours back #Aajtak was trending on Twitter India. A massive outrage from Twitterati was not strange as a leaked video surfaced on internet which shows an Aaj Tak reporter offered alcohol to speak against BJP. The matter went viral and then came Rahul Kanwal the Managing Editor of TV today network who also hosts Seedhi Baat on Aaj Tak.

Rahul Kanwal on behalf of Aaj Tak management declined the matter when it was clearly visible that the reporter was holding Aaj Tak’s mic.

Here Are Some Tweets In The Matter

Unreal! #AajTakChor, offering a child money/alcohol for saying what the journalist wants him to say. @aajtak https://t.co/phuHFLQPN0

When RAHUL KANWAL came to the rescue

@malviyamit it's not an Aajtak reporter. Not even a stringer. Putting out a statement shortly.

The suspicious part of this statement is where it says,” it was not Aaj Tak’s stringer(freelance reporter) whereas later its clearly written that the stringer’s contract has been terminated”.

PS – RVCJ does not claim to originality of the video and we don’t intend to defame anyone. We are just trying to convey the alleged story to the world.

What do you think about this act. Even if it was not done Aaj Tak’s media person. It is still pathetic to ask someone to speak against anyone by offering bribe. Share your thoughts in the comments section.

After Wedding Pics, Watch Kohli & Dhawan’s Viral Dance At Harbhajan’s Wedding
How Censor Board Will React To Hindi Movies In Future? It’s Hilarious To Watch