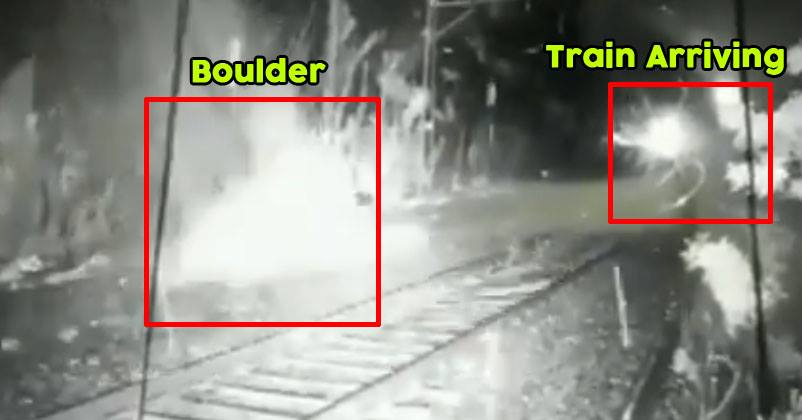 A CCTV camera turned out to be a blessing in disguise when an accident was averted on the railway line between Mumbai and Pune due to it. The Indian Railways has been taking appropriate precautions since monsoon is approaching.

The Mumbai-Kolhapur Sahyadri Express was reaching Lonavala when a boulder fell on the tracks at around 8:15 PM. Thankfully the incident was caught on the CCTV camera installed in the Monkey Hill area in the Bhor Ghat of the railway line.

#WATCH Maharashtra: A boulder fell on the railway tracks near Lonavala, around 8 pm on 13 June. Mumbai-Kolhapur 11023 Sahyadri Express was delayed for around 2 hours due to the boulder. All lines were made operational by 11 pm. (Video source: Central Railway CPRO) pic.twitter.com/Jbq3iOSyRe

Reportedly, the boulder was 2.3 meters long, 1.6 meters in height, and 2.2 meters wide in dimension and it would have caused serious damage, had it hit the train. But the staff who were watching over the CCTV footage sprang into action and alerted the authorities of a landslide. They also cut off the power line to halt all the scheduled trains of the route.

Railway Ministry spokesperson Smita Vats Sharma, “A major accident was averted after cameras and communication systems installed in the Mumbai-Pune Bhor Ghat mountain section of Central Railway alerted the authorities of a landslide on the rail tracks on Thursday night at Monkey Hill near Lonavala.”

The Mumbai-Kolhapur Sahyadri Express was later sent back to Thakurwadi station. The passengers were also taken care of by the Indian Railways. They were served water and snacks at the station.