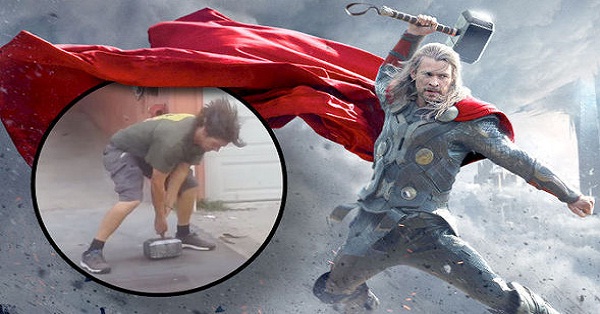 We all know that Thor’s hammer can only be lifted by someone who is worthy of it. Well, the movie proofs this saying. But, if you still don’t agree to it, a person has built a Thor Hammer (Mjolnir) by using his technical skills which only he is worthy to lift. Unless, someone uses their mind and see the trick.

A YouTuber with channel name “Sufficiently Advanced” has created a replica of Thor’s Hammer which uses a fingerprint reader on the handle and magnets inside of the hammer. So. ultimately when the hammer is placed on some metal which attracts magnet, the hammer sticks to it like a glue. In that case the hammer can only be lifted when the person who’s thumbprint is stored in the hammer is used after which the hammer’s magnets are released and the hammer is successfully picked up.

The creator of this Thor Hammer pranked random strangers on the street asking them to pick up the hammer. Watch the hilarious video below:

Did you like the prank by the creator of the Hammer. Let us know about your thoughts in the comments section below.
Featured Image Source

Continue Reading
You may also like...
Related Topics:A Man Built A Real Thor Hammer That Only He Is Worthy To Lift, Avengers, hammer, Mjolnir, thor

This Video Of Deepika And Her Parents Explains Why You Should Celebrate Diwali With You Parents
Factory Worker Brutally Beaten To Death For Being Accused Of Theft, Video Went Viral