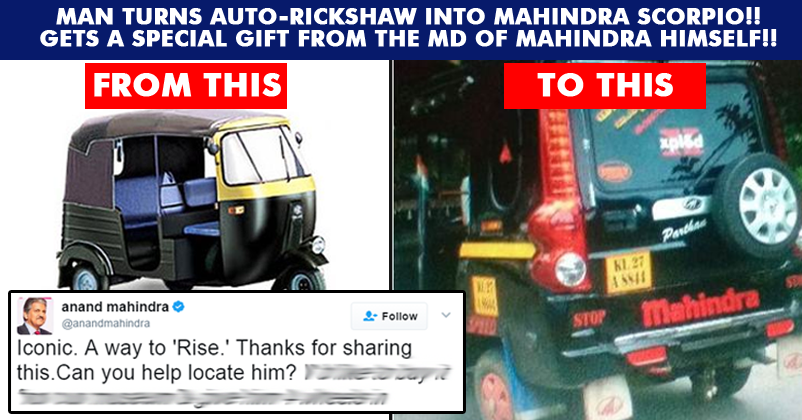 Need is the mother of inventions. When we have a desire burning inside, no matter what the problems are, we create a way to fulfill them. A Kerala-based auto rickshaw owner Sunil PS, had a desire to own a Scorpio and lack of money failed to resist his path. With his creativity, Sunil ended up modifying his 3 wheeler auto rickshaw into a Scorpio. Now someone clicked this wonderfully redesigned vehicle and tweeted the picture to Anand Mahindra, the Managing Director of the Mahindra Group.

As soon as it caught his attention, he was eager to acquire it for the company museum and reward him a new 4-wheeler in return.

Anand Mahindra took no time to tweet and request people in locating Sunil. This is what he tweeted –

Iconic. A way to 'Rise.' Thanks for sharing this.Can you help locate him? I'd like to buy it for our museum & give him 4 wheels in return.. https://t.co/uwQ5wYcDpW

“Iconic. A way to ‘Rise.’ Thanks for sharing this.Can you help locate him? I’d like to buy it for our museum & give him 4 wheels in return.”

And finally, after more than a month, Sunil was located and Anand Mahindra not only met him but also kept his promise of gifting him a 4 wheeler. He tweeted again; –

Remember this request?Our team managed to locate him! And we acquired the 3 wheeler from him..Gave him a 4 wheeler in return (1/2) https://t.co/mJ7tDdRhTQ

“Remember this request?Our team managed to locate him! And we acquired the 3 wheeler from him..Gave him a 4 wheeler in return (1/2)”

Here's Sunil, the proud owner of the 3 wheeler 'Scorpio', now a happy owner of a 4 wheeler. All thanks to you twitterati! (2/2) pic.twitter.com/5nb12j2dnj Now, this is indeed a great thing to do. While we applaud Sunil for his amazing work, we also respect Anand Mahindra for his heart-warming gesture.

Here is how people reacted;

I spoke to sunil and was very delighted but he was expecting scorpio S10 from your https://t.co/AGNR4hCl76 have a big heart kindly provide.

Anand sir. That's a great informal reward for innovation. All possible because as a CEO you are on twitter and actively reply too. Kudos.

thats Nice … Some of these acts cud bring in as much happiness as a healthy balance sheet.

What do you think of that? Isn’t social media a great platform if we use it in the right way? Share your thoughts with us.

Man Shot The Girl He Loved The Most & Later Shot Himself Too
Satellite Images Reveal North Korea Is Secretly Building Artificial Islands For Missile Launch!