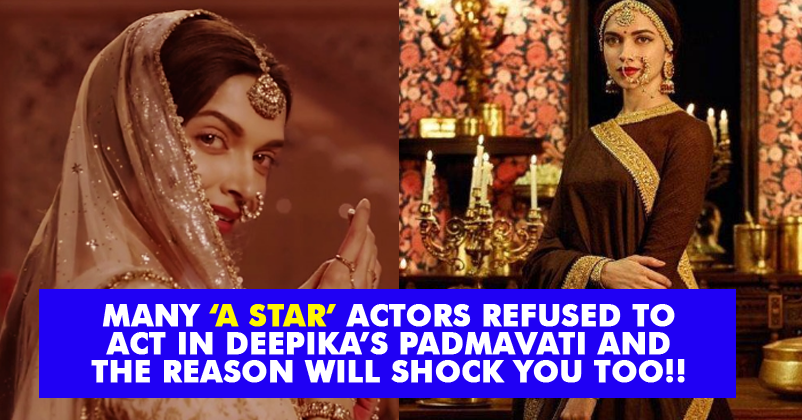 Padmavati, which is the 3rd collaboration of Deepika Padukone with Sanjay Leela Bhansali, has made it to news continuously since the day it was announced. From the speculations of its star cast to the news of it being one of the biggest budget films ever, to the violence on the sets, this one has remained the talk of the town far before the release.

The film which stars Shahid Kapoor & Ranveer Singh alongside Deepika Padukone in important roles is again in news. This time the film is being talked about because of the reports that many A-List male stars rejected it. Want to know the reason?

Well, they rejected it because they felt the title of the film is Padmavati, so it will be a female oriented film revolving around Deepika’s character.

As per Rajeev Masand-

“Bhansali stuck with his leading lady even after top male stars offered to star in it if the director was willing to change the title to sound less like it revolved around the heroine. Deepika is returning the favour by standing firmly by Bhansali’s side, focusing solely on Padmavati, even as her co-actors Ranveer Singh and Shahid Kapoor are dividing their time between Bhansali’s set and ad-films, appearances, and the like.” Well, we are happy to see the bond between SLB & Deepika and believe that they will come up with spectacular stuff. Also, Shahid & Ranveer are mature actors and they will surely justify the characters of Raja Ratan Rawal and Aluddin Khilji. What do you think?

1st Weekend Collections Of Super Singh & Bank Chor Are Out! Punjabi Film Has Overpowered Bollywood Too!
So Many Big Bollywood Stars In JP Dutta’s Next “Paltan”! It’s Going To Be Bigger, Better & Blasting