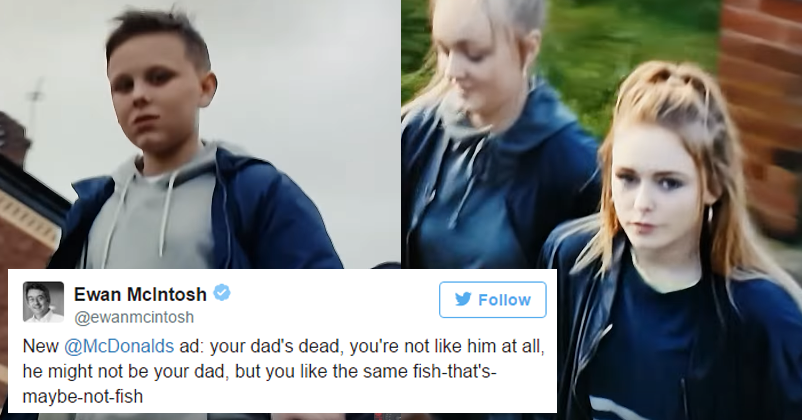 Creating an advertisement which connects with the hearts of audiences is a difficult task for the ad agencies; sometimes they succeed and at other times, they fail; however, at times, they make blunder and this time, McDonald’s has done it with their Dead Dad Ad.

If You Have Not Watched The Ad Yet, Here It Is!

Whether you felt it or not, we got some sad vibes from the title of the ad and after watching it, our emotions were not on a positive side of the commercial.

The advertisement features a son who is trying to find out whether he is like his dad or not and whatever traits his mom tells about his father such as the color of his eyes, fondness for football etc., the boy matches with none of them and then comes the last one; his father’s favorite item in McDonald’s menu was a fish sandwich and there you go, the boy at last gets something which he shares with his father.

The burger giant has been criticized heavily for this ad as we live in a society and certain aspects should not be cashed because they can hurt a person emotionally. This ad has touched two such aspects – kids without dad and widows and many people are left hurt with it.

This advertisement was launched last Friday and was scheduled to run for seven weeks. Moreover, it may have coincided with Father’s Day. The Bereavement Charities is also not happy with the ad, as Founder and President of the charity, Dr. Shelley Gilbert, stated,

“McDonald’s have attempted to speak to their audience via an emotionally driven TV campaign. However, what they have done is exploit childhood bereavement as a way to connect with young people and surviving parents alike–unsuccessfully.”

People are not just slamming this ad on social media but also filing their complaint with UK’s Advertising Standards Authority (ASA).

Just saw a McDonald's ad about a son asking his ma about his dead dad. Then he orders his dads 'favourite burger'. shoot me, I'm finished

This is so poorly thought through and insensitive – McDonald's apologises for 'dead dad' ad – BBC News https://t.co/HFoPJ1PjYd

As per Marketing Week, nearly 100 complaints have been received till now and the count is supposed to go much higher considering the outrage visible in the present time.

However, McDonald’s has already realized its mistake and apologized and will pull its ad.