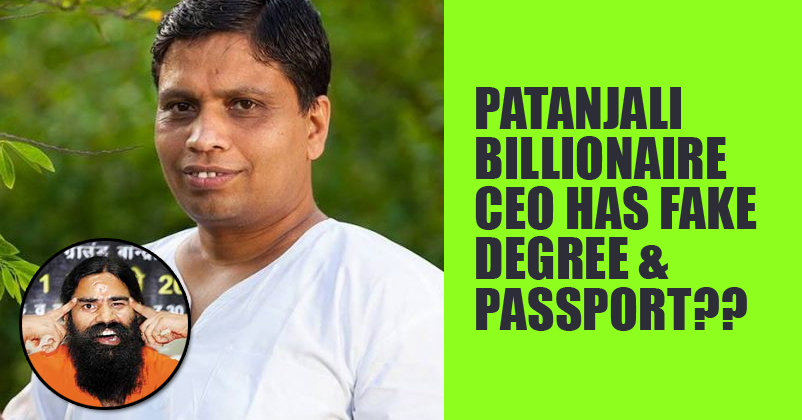 We have made a hell lot of jokes on BABA RAMDEV for the commodities like Patanjali Cigarettes, Patanjali Whiskey, Patanjali Jeans and what not. But it is BABA RAMDEV who always had the last laugh at the end of the day. He is the brand ambassador of PATANJALI COMPANY but it is this contentious 43-year-old man Balkrishna Suvedi, often referred as Acharya Balkrishna who is cracking the pots ! ! Balkrishna Suvedi was born to Nepalese parents – Sumitra Devi and Jay Vallabh, who later migrated to India where Balkrishna Suvedi met BABA RAMDEV at a Gurukul in Haryana. They later founded an ayurvedic pharmaceutical company – ‘Divya Pharmacy’ in the 1990s. Together they set up a no. of other businesses where he served as the managing director. He now heads three trusts associated with Ramdev. He is also the CEO of PATANJALI Company which is apparently a fast growing FMCG whose net sales for the financial year 2015-2016 stood at whooping Rs 5,000 crore. He is the man behind this big business. He owns a majority stake which roughly accounts for 94% in Patanjali Ayurved and has now entered into India’s Rich List Of 2016 as a billionaire with an insane amount of Rs 25,600 crore ($3.82 billion) under his belt.

Well, the concept and initiative of ‘MAKE IN INDIA’ is certainly being promoted on a very large scale through his company, but Balkrishna Suvedi’s name can still be found under pile of controversies. He was charged with criminal conspiracy and cheating for producing fake degrees to acquire an Indian passport which indeed raises questions on his Indian Citizenship. Coming down to the track on his academic qualification, his high school degree i:e ‘Purv Madhyma’ and Sanskrit degree i:e ‘Shastri’ from Sampurna Nand Sanskrit University do not exist on records. Apart from this, back in 2012 he went into hiding and was later arrested by CBI ( Central Bureau Of Investigations ). The Bureau claimed that his passport was issued on the basis of his fake high school and graduation certificates. He was also charged for acquiring arms and ammunition without a legal permit. And this is not the end of his controversies. He was later charged on money laundering by the Enforcement Directorate (ED). However the case was dropped as soon as the National Democratic Alliance (NDA) came into power in 2014. He was given a ‘CLEAN CHIT’ by the CBI due to the ‘LACK OF EVIDENCE’ against him.

However, we can’t rule out the fact that under his leadership skills, PATANJALI or more precisely an Indian Company has recently beaten all established FMCG firms and has cut into the market share of big players like Dabur, Baidyanath and Zandu that deal with ayurvedic and herbal products. The company has collaborated with many foreign firms and has been exporting it’s product to the countries like USA, UK and CANADA to meet the turnover target of Rs 10,000 Crores in the ongoing financial year (2016-2017). By the year 2020-21, the company aims achieve its sales targets of Rs 1 lakh crore.

If you have any extra relevant information regarding this subject then please share it with us in the comment section below ! !