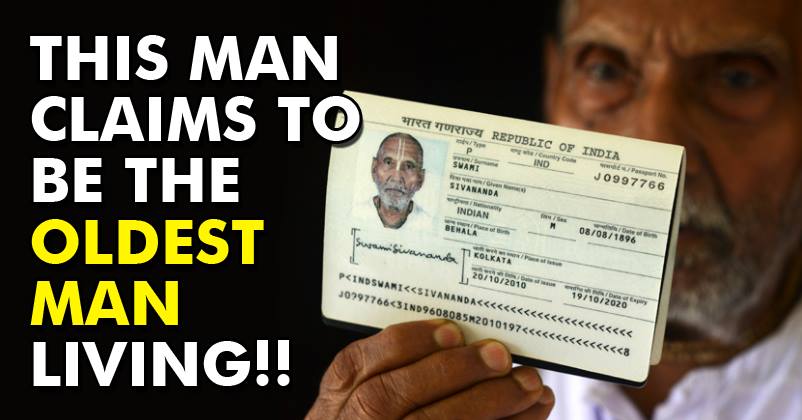 If we go by his looks, then there is no chance that we can predict his correct age but no matter how impossible it may seem, it is true that Swami Sivananda is 120 years old and now he is the oldest man alive on the earth. As per his passport, the birth date of Swami Sivananda is 8th August, 1896 and despite being so old in age, he is still pretty strong to practice yoga for hours at a stretch. Earlier the oldest man on the Earth was Jiroemon Kimura from Japan who died at the age of 116 years and 54 days in June 2013. Swami is going to apply in Guinness World Records to validate his claim of being the oldest person alive. Swami’s age has been confirmed by the Indian Passport authorities based on the records of the temple register. The temple registers were the only records where Indians used to record their date of birth in old times. However, it is almost impossible to check his age, independently. Swami has devoted his life to “yoga, discipline, and celibacy” as he has become a monk after facing severe poverty in his life.

Swami talked to AFP after conducting 2 hours long session in the city of Kolkata and told them, “I lead a simple and disciplined life. I eat very simply — only boiled food without oil or spices, rice and boiled daal (lentil stew) with a couple of green chillies.” Swami, who measures 5.2 inches in height, doesn’t sleep on the bed but on a mat on the floor and for pillow, he uses a wooden slab.

He further added, “I avoid taking milk or fruits because I think these are fancy foods. In my childhood I slept many days on an empty stomach.” Swami also said that he was in no mood to make the claim in Guinness World Records as he didn’t want publicity in any form but he was being persuaded by his followers. This Yogi lost his parents at a very young age of six and his relatives gave him to a spiritual teacher, with whom he travelled all over India before making Varanasi his home. Swami is perfectly fit and has no medical problems. In spite of being so old, he travels alone in trains and lives independently. Swami is also not much fond of technology and likes to keep his life simple. In his words, “Earlier people were happy with fewer things. Nowadays people are unhappy, unhealthy and have become dishonest, which pains me a lot. I just want people to be happy, healthy and peaceful.” Hats off to him!

Did he inspire you? Are you planning to change your lifestyle after knowing about him? Let us know your views about the article in the comments section below.

He Was Once The Face Of Gujarat Riots, Now A Face Of Muslim-Dalit Unity
This Sweet Twitter Conversation Between R.Ashwin And His Wife Gives Us Relationship Goals