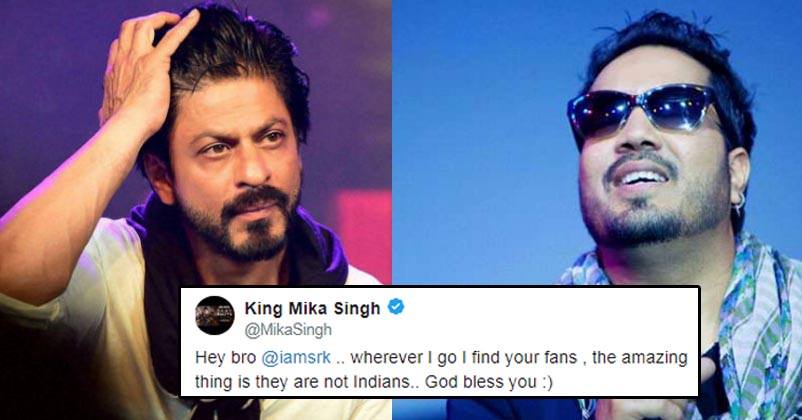 SRK enjoys immense popularity, not only in India, but all over the globe. He has die-hard fans, who leave no opportunity to make him feel happy and special. Bollywood has many celebs, but SRK’s charm can’t be compared. This is the reason why he is aptly called “King Khan”.

Apart from desi fans, he always gets love from NRIs too. Yes, people abroad watch his movies with equal excitement and zest. Today, we came across a conversation between Mika Singh & SRK over his fan following.

Well, Mika Singh tweeted a video of a foreigner fan who is crazy for SRK and dances to the tunes of Kabhi Khushi Kabhi Gam. Well, he tagged SRK and told him how even foreigners love him so much.

Check out the video;

Hey bro @iamsrk .. wherever I go I find your fans , the amazing thing is they are not Indians.. God bless you 🙂 pic.twitter.com/1waCRCFSYD

Wow, this was lovely. The fan has watched all the movies including K3G, Koyla & Kuch Kuch Hota Hai. SRK was overwhelmed to see the fan giving him so much respect. On seeing the video, even he took to Twitter to give a heartwarming reply.

That is way to sweet. Thanks https://t.co/cPOznXHD3h

The tweet read, “That is way to sweet. Thanks”

He had a simple and a subtle reply to Mika Singh’s tweet. Here’s how fans reacted;

He is a Global superstar who has achieved this kind of Stardom by honest & hardworking. There was no godfather behind him like salman& aamir

Everyone loves SRK & no doubt, he’s the best superstar. We thoroughly enjoyed the conversation.

Continue Reading
You may also like...
Related Topics:Mika Singh, SRK

Dhinchak Pooja Fell In Love With Luv Tyagi & Twitter Is Left In Splits
Zomato Sent Cake To Customer With Message “No Garlic”. This Is How They Apologized Later