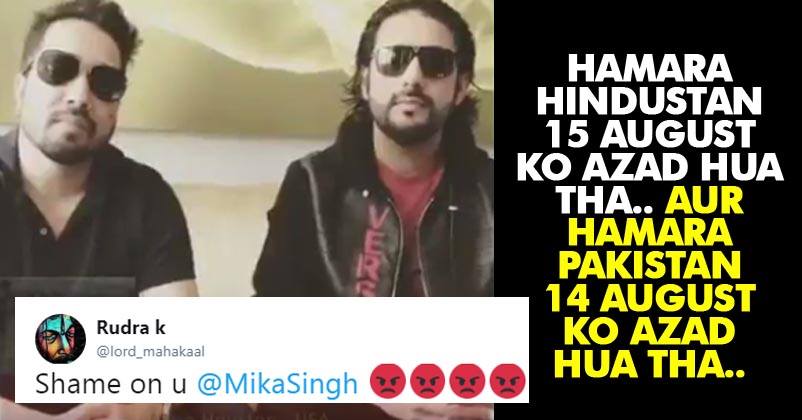 Be ready to rock with me ..Housten and chicago…. I'm coming to rock you guys Jai hind:) pic.twitter.com/nTbvpF1g7P

The tweet read, “Be ready to rock with me ..Housten and chicago…. I’m coming to rock you guys Jai hind:)”

Things were fine till this tweet, but as soon as the organizers of the show shared a video, people got furious. In the video, Mika is heard saying, “15 August ko humara Hindustan azaad hua tha aur 14 ko humaraPakistan”

Someone shared the video; have a look…

The term “Humara Pakistan” didn’t go down well with Twitter users; they slammed him left and right for celebrating Pakistani day.

@MikaSingh can't believe it was you who was celebrating Independence Day of Pakistan.. shame on you .. agle janam tohe Pakistani hi kije !!!

I Request to all Nationalist .. Please blocked @MikaSingh !

You are supporting such a country?

Only fame and money!

Such traitors have no love towords nation they only want fame and money..

What do you have to say on this? Feel free to let us know your thoughts.

Manforce Just Launched “Achaari” Flavor & People On Twitter Are Going Crazy!
Nita Ambani Uses A Phone Worth Rs 315 Crores? The Truth Behind The News Is Something Else!