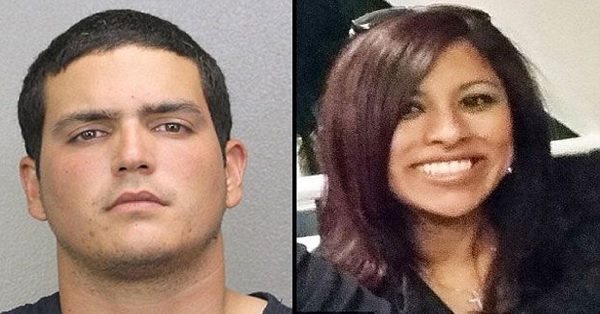 A report has been coming from Florida, USA, that a man has been reportedly charged for murdering his girlfriend by disemboweling her with his own bare hands after they consummated sex. Apparently, she screamed her ex-husband’s name while they both were having sex, police said.

According to the police, Fidel Lopez the man who committed this heinous crime confessed that, “he and his girlfriend (Maria Nemeth) both were drunk while having sex, and he went into rage condition when after she screamed her ex-husband’s name while consummating sex inside their Apartment in Florida. The Sunrise Apartment where this heinous crime took place

The Investigators reports that the monstrous man has admitted to breaking the glass door and punching holes into wall in drunk and rage condition.

He also confessed butchering her 31-year-old girlfriend while she was lying unconscious on the bathroom floor. He shoved hair iron, and both his fists inside the woman’s sex organs to rip her intestines. Later, he tried to revive her by splashing water on her face. But when it didn’t work, he called police at 3.30 am in the morning.

Lopez was crying over the woman’s body lying in a pool of blood when Paramedics arrived. The woman was declared dead at around 4.00 am in the morning.

Initially, this “monster” person made up a story when police arrived while stating that, “His girlfriend wanted him to insert a beer bottle inside her which made her dizzy and went to bathroom to vomit, this is when he found that she was having trouble in breathing and called the police”.

But later during strict investigation, he revealed that he became enraged when she screamed her ex-husband’s name while having sex which lead his rage in such level where he attacked her in horrific way.

Fidel Lopez is charged for first-degree murder is held in jail.

Continue Reading
You may also like...
Related Topics:A Monstrous Man Rip's Girlfriend's Intestines Out After She Screamed Ex's Name During Sex, crime against woman, florida

BIGG BOSS 9 – Most Awaited Date Of The Year Is Out. Check Out New Promo Where Salman Announced The Date Of New Season
This Is How Every Men Should Be Taught: Virginity Is Just A State Of Mind