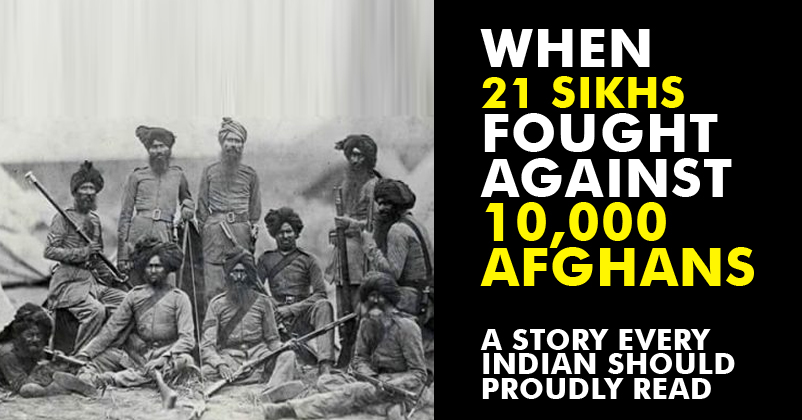 The month of September is slithering by and 12th September brings with it a story of the greatest last stands the world has seen. It is no story out of a Hollywood movie like 300. It is a real story of the brave Sikhs under the British Indian army. In 1897 on September 12th history was written by 21 Sikhs of the 36th Sikhs (now the 4th Battalion of the Sikh Regiment) when they fought against 10000 Pashtuns (Afghans) of Afghan Orakzai tribe. It is considered as one of history’s greatest last stands where under the leadership of Havildar Ishar Singh chose to fight and save the signal post of Saragarhi. The unit when under attack signalled Col. Haughton at Fort Lockhart for reinforcement but they were told that they cannot get immediate help. The Sikhs brave as they are decided to defend the post till their last. They Afghans tried to rush open the gate twice but failed miserably. They even offered the soldiers to surrender. The last to be martyred and last Sikh defender was Gurmukh Singh, who communicated the battle with Col. Haughton. He is stated to have killed 20 Afghans, the Pashtuns having to set fire to the post to kill him. As he was dying he was said to have yelled repeatedly the Sikh battle-cry “Bole So Nihal, Sat Sri Akal” They Afghans moved on to Fort Gulistan but they were late. The brave Sikhs had managed to delay them long enough for reinforcements to arrive at Gulistan on nights of 13-14 September. 21 Sikhs killed over 450 Afghans (as per British Indian estimate the Afghans claim the death toll to be 180) but over 600 bodies were found ath the place when the relief party arrived at the ruins of the place. The maximum of the Sikhs who laid down their lives belonged to Ferozepur District of Punjab in India. Even the British government was moved by the bravery and all the 21 men were awarded the Indian Order of Merit which was the highest gallantry award any Indian could win. It corresponded to the Victoria Cross. The award equivalent to Param Vir Chakra of present time. The 21 Sikhs who won the honour are as follows:-

The British even built two Gurudwaras in remembrance of the martyrs. The Government of India has even erected a memorial in the remembrance of valour. “The Government of India have caused this tablet to be erected to the memory of the twenty one non-commissioned officers and men of the 36 Sikh Regiment of the Bengal Infantry whose names are engraved below as a perpetual record of the heroism shown by these gallant soldiers who died at their posts in the defense of the fort of Saragarhi, on the 12 September 1897, fighting against overwhelming numbers, thus proving their loyalty and devotion to their sovereign The Queen Empress of India and gloriously maintaining the reputation of the Sikhs for unflinching courage on the field of battle.”

Sikh military personnel commemorate the battle every year on 12 September, as Saragarhi Day. Do not forget to share your views in comments below.

8 Misconceptions That Rest Of India Has About Delhiites
Robber Threatened A Punjabi Aunty With Knife! What She Did Next Will Make You Proud Of ‘Punjabis’