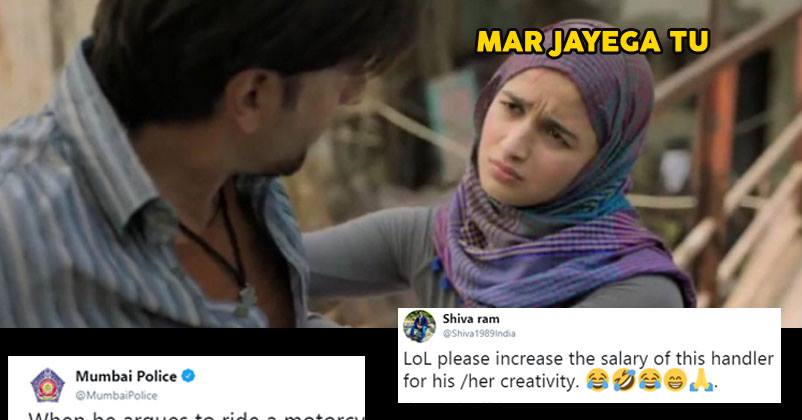 Since the trailer of Gully Boy was released, it got all the love and appreciation from all around. From Bollywood celebrities to common people, hashtag Gully Boy became instantly trending.

The trailer which featured Ranveer Singh and Alia Bhatt was applauded for its sincere portrayal of characters and the raw tenacity that is too evident in that three minutes only.

Gully Boy’s dialogues are too real, the moment it got released it became one of the best part of the film. And netizens found the dialogue by Alia Bhatt ‘Mar Jayega Tu’, the most prominent ingredient for memes.

Now, it is interesting to note that how Mumbai Police used this dialogue to spread awareness about road safety. The message is quite prominent and netizens are loving it.

When he argues to ride a motorcycle without wearing helmet #SillyBoy pic.twitter.com/OPzycNdEAm

Someone give this account handler a salary hike😅😂 https://t.co/ojyLR1IyMx

Even Nagpur police used Ranveer Singh’s dialogue ‘Apna Time Ayega’, to refer to the patience people should have, while waiting in the long traffic signals. Check their tweet out.

So, how are you using these lines?

Gully Boy Trailer Is Out, Bollywood Celebs Are Simply Loving Ranveer’s Asli Hip Hop
Virat Kohli Topped The List Of Most Valued Celebs, You Won’t Believe His Net Worth.