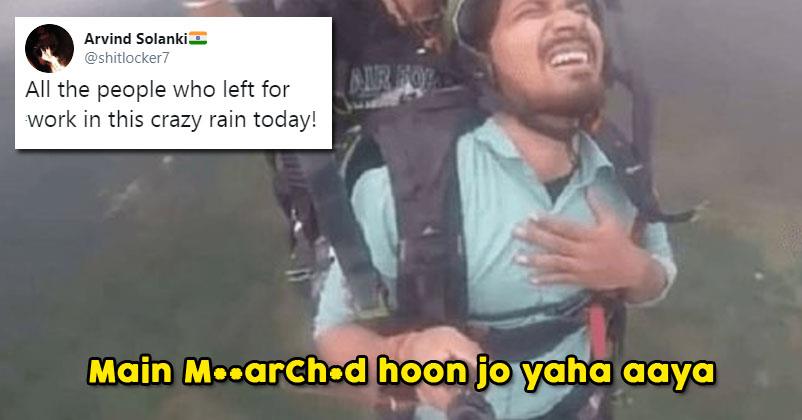 Rainfalls are back in Mumbai to show the authority the real face of the Drainage System they’re proud about. Two things are very much common with monsoon hitting MUMBAI.

It has been raining non stop since last 24 hours the IMD authorities have indicated heavy rainfall in Mumbai for next two days. As precautionary measures schools shall remain closed today across the city, even the principals of the schools has been asked to send back the students safely to their homes.

Bombay Municipal Corporation warned the people and have asked them to stay indoors till the water logging is diminished.

Considering IMD’s heavy rainfall warning, we request Mumbaikars to stay indoors in safe premises till the water in low lying areas recedes. Please call us on 1916 or tweet to us for updates. #MumbaiRain #mumbairainliveupdates #MCGMUpdates

When your boss is 188 years away but still asks if you're at work.#MumbaiRains

Today Mumbaikars can do Visarjan at their doorstep #MumbaiRains

Virar guy in office, on hearing that local trains have stopped.#MumbaiRains pic.twitter.com/0Yhcn42i5j

#MumbaiRains please stop, we have a train to catch pic.twitter.com/xEOQ79mYH0

Be safe and don’t forget to reach out for help in any emergency!

Scooty Rider From Delhi Was Fined Rs. 23000 For Violating Traffic Rules With His Scooty Worth 15000
Johnny Sins Reacts To Ex-Pak Envoy Abdul Basit For Acknowledging Him As Pellet Gun Victim