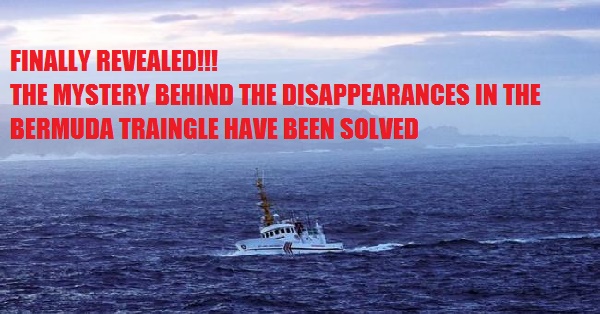 The Bermuda Triangle or as it’s also known as Devil’s Triangle is one of the most mysterious places on earth. This water body which lies somewhere between Bermuda, Florida, and Puerto Rico creates an imaginary triangle. it is believed that any ship or aircraft which goes through this area gets missing and no survivor has been recovered till date. There were many theories given by people which included some supernatural explanations. It is said that, the submerged city of Atlantis could be the cause of the missings as it might have been submerged in the the same area.

But on the other hand, Scientists say that a discovery of giant underwater craters at the bottom of Barent’s sea could offer a viable explanation to the disappearance of ships in the Devil’s triangle. Scientists have found craters up to half a mile wide and 150 feet deep believed to have been caused by a buildup of methane off the coast of natural gas rich country Norway. The methane would have leaked from the deposits of natural gas further below the surface and created cavities which bursts. It is also believed by Scientists that, multiple giant craters exist on the sea floor in an area in the west central Barents Sea which probably causes enormous blow out of gas. The crater area likely represents one of the largest hot spots for shallow marine methane release in the arctic. Basically, the explosion causes the craters to open up which poses risks to vessels travelling on Barents Sea and which ultimately sinks the ships and makes aircraft’s engine unable to work.

Continue Reading
You may also like...
Related Topics:The Mystery Of Disappearances In Bermuda Triangle May Just Have Been Solved. Here's The Theory

This Is How Much It Will Cost You For Travelling In The Bullet Train Between Mumbai And Ahmedabad!
Troubles Grew For SRK’s “Raees”? Rakesh Roshan Reacts On Clash Of Raees Vs Kabil Release