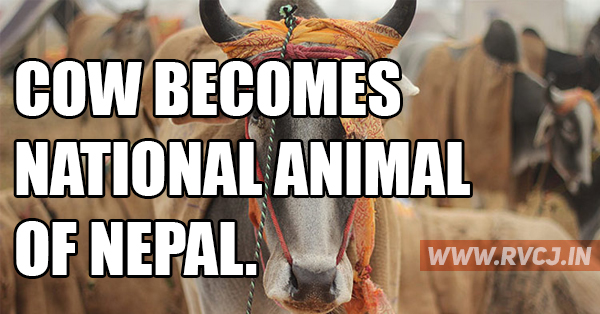 Nepal Declares itself as Majority Hindu Nation as a Secular Republic divided into Various Federal Provinces.

India’s reaction in the past to events in Nepal has been quite remarkable. On Friday, just a couple of days before the constitution of Nepal was formally adopted India’s top diplomat was sent to Kathmandu , Nepal on the Behalf of India’s Prime Minister Shri. Narendra Modi.

Krishna Prasad Sitaula , Secretary General of Nepali Congress Said ” Keeping Spiritual belief of all Hindus in Nepal ” we have declared Cow as The National Animal.Entire Nepal Celebrated the Moment , However there were some Non-Violent Activities in Some remote parts which were then resulted into peace.

Cow which is Worshiped by the Hindus all over the globe has been declared as ‘National Animal Of Nepal’ , Now Cow has Constitutional Protection and Cow Slaughter all over Nepal Has also been Banned.

One – Horned Rhino was also been nominated by some Members of Nepali Congress but it was then rejected and Cow was Officially Declared the National Animal of Nepal.

We Congratulate All Nepali Brothers & Sisters on Adoption of Constitution of the Nation.

After Public Outrage, Govt. Removes The New WhatsApp Policy Of Not Deleting The Messages
Another Moral Policing Incidence Shocked The Nation: Couple Brutally Beaten By The Mob Is this where we are heading to?