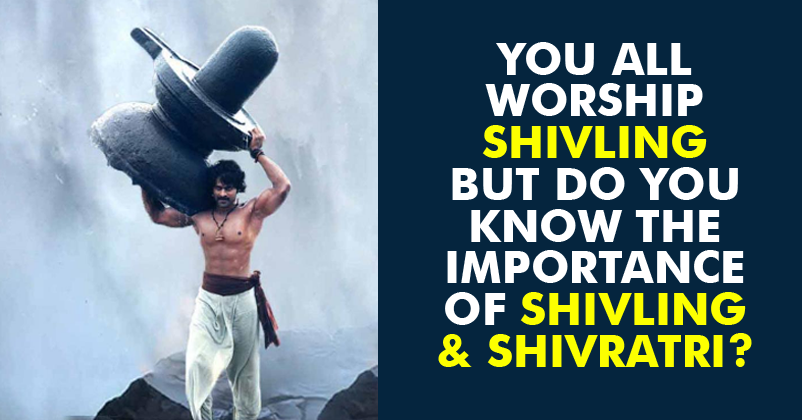 I still remember the time when my mother used to wake me up early in the morning so that I could get fresh and go to the temple on the occasion of Shivratri. I was too small to think about the reasons and logics to pour milk and water on a simple cylindrical black stone. Perhaps, this article published by one of our writers very clearly explains the importance of Shivaling and the reason behind pouring milk/water on Shivaling. Well, that article indeed helped me to understand our Shivling in a much better way, but was that enough?

As a Hindu, I have read many things in many forums where people irrespective of their religion, community and caste had tried to mock the believers by tagging them as ‘worshipers of pen*s’. The reason why I didn’t choose to write the whole word is because of ‘GOOGLE POLICY‘. I won’t say it hurts to read such kinds of stuff but gives me an immense pleasure to grab the opportunity to clear the doubts that what we, as a society thinks about ‘SHIVLING’.

Just have a look at ‘Shivling’. Now, the way people perceive the word ‘SHIVA-LINGAM‘ is way too disappointing. The Sanskrit term लिङ्गं liṅgaṃ, transliterated as lingam has 3 basic interpretation as per spiritual level of an interpreter.

The word ‘LINGAM’ means ‘SYMBOL’ in Sanskrit. It is a symbol of the eternal super-shiva consciousness. It does not have any image of itself. It’s just a ‘mark’. Lord Shiva in this respect can be considered as an Omnipotent Lord, which is formless.

Having said that it’s a SYMBOL. A various group of people interpreted this in a different way. Some took this as a male and female genitals. They considered ‘Lingam’ as a male genital and the ‘base’ as a ‘yoni’. YONI represents ‘female genital’. Everyone has the right to interpret things, but the place where they went wrong was to understand its REAL meaning. They considered the meeting of these two genitals as a ‘Sexu*l Act’, which is completely misunderstood.

If one closely looks at the image of ‘Shivling’ from the perspective of people who consider the ‘LINGAM’ as a male genital, it is actually coming out from the ‘YONI’ rather than going inside it. This is not a ‘SEXU*L ACT’ as per claimed by such people. It is actually a ‘SYMBOL of CREATION’. Didn’t understand? Neither did I at the first attempt. Okay, Have a look at this. This is how one can represent the coming out of a ‘LINGA’ from a ‘YONI’. A son being born is a SYMBOL of CREATION. I hope some feminazis don’t start questioning every single form of it. It’s just for making people understand and has nothing to do with ‘GENDER INEQUALITY’.

The explanation that I just gave was for the people who considered LINGAM as a male genital. But in actual, it’s just an INTERPRETATION, like the rest. Another interpretation that I had discussed earlier in this article was that it is a symbol of the eternal super-shiva consciousness. It’s a state of self-realization that is beyond birth, death, bad, evil, holy and even time and universe too. In a way, it’s slightly contradicting to what I had mentioned earlier. But as someone said, contradictions are important. It makes a channel for discussions and having doubts is good for clarity.

‘LINGAM’ is also interpreted as ‘STILLNESS‘. In order to stay still, one needs to stay balanced. And in order to balance the equation of life, we need to accept all the positives as well as the negatives. Hence, it boils down to ACCEPTANCE. You can make your numerous deductions about SHIVALINGA, but the point is that your deduction needs to be somewhere close to the ACTUAL meaning of it. I am really sorry if you think that I have explained things with a wrong perception. I would love to know what our readers think about Shivaling and if readers have some extra knowledge that I missed to add then please share it with us in comments section below.

Continue Reading
You may also like...
Related Topics:how shivratri, ling, linga, shiv, shivling, what, why, why celebrate shivratri

She Became IAS Officer To Take Revenge Of Father’s Murder & It Took Her 31 Yrs For This
After 100% Pay Cut Announcement & Layoffs, Snapdeal Founders Wrote This Email To Employees