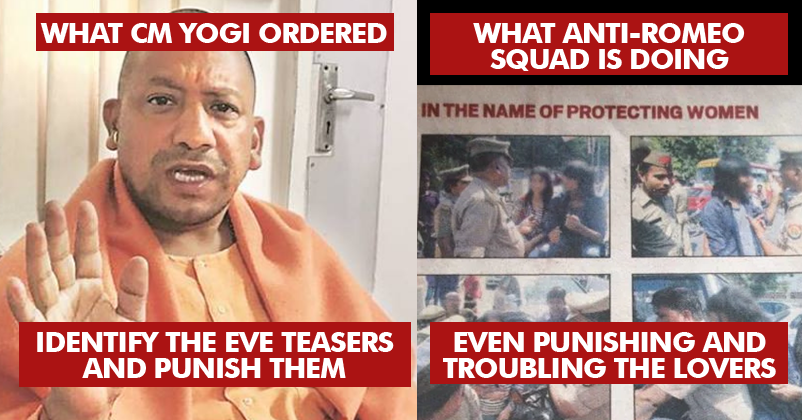 We recently came up with an article where we showed how Yogi Adityanath took a Anil Kapoor’s Nayak like ‘avatar’ that shook the entire state for all good and wrong reasons. Click here to read that article. Seeing the current situation of how things are getting unfolded in the state of Uttar Pradesh, we feel like to recall the great line from the movie ‘Spiderman’. With great power, comes great responsibility. The way Uttar Pradesh Police is right now considering the ‘Anti Romeo Act’, Uncle Ben should definitely be with them in order to give them a good piece of advice. In a recent interview with one of the cops from these Anti-Romeo Squads, it was found that they have a special ability to find out the creepy guys just by having a look in their eyes. Seems like a QR Code kind of thing. However, jokes apart, it’s a good initiative to launch a squad like this that is meant to protect women from eve teasers, but at the same time, it can become a much worse option if the same squad slightly tilts from its main objective and miserably fails in making correct judgments.

Going through many protests stories that are popping up on the internet right now, it seems like the Anti Romeo Squad are currently failing to understand their real objective. In some of their cases, they are just simply acting like a moral police who are catching up the young couple and punishing them for a heinous crime like ‘meeting up’ for a cup of coffee or for a selfie shoot. The idea for the formation of such a squad is to ensure women safety from the eve-teasers who roam around college campuses and harass girls. According to some our facebook friends from Uttar Pradesh, this is very common and this situation needs to be dealt with strict actions. But in the midst of removing weeds around a beautiful flower, you just can’t afford to pluck the whole root of the flower itself. In short, the process of narrowing down on such creeps can’t be generalized in such a simple formula where the only factor that determines your answer is the work experience of your eyes and how good they decode someone else standing posture. Well, we can’t deny the fact that even these Anti-Romeo Squads can commit mistakes, so here is a piece of advice that we want to give. When you feel like someone is trying to harass a girl, why not just simply ask the girl who you feel is being harassed before you bash up the guy. She probably must be having a better idea than you. They need to understand that a boy sitting near a girl in a public place with her consent is certainly not an eve teaser who needs to be put in jail. There are still a lot of rape threats looming online that girls report on every other second. Ever cared to work on that?

We RVCJ Team, do feel that the Anti Romeo Squad should be there for women security and this decision is indeed a good one, but the process of narrowing down on ‘ROMEOS’ should be done in a much proper manner where the innocent ones shouldn’t be harassed for no reasons. Senior responsible members of various civic societies should be deployed along with such squads so that they can handle such situations in a proper way. Their judgment calls are apparently expected to work in a better way than someone else ability to become Desi Sherlock Holmes.

Continue Reading
You may also like...
Related Topics:anti romeo squad, bad, good, how, what, why