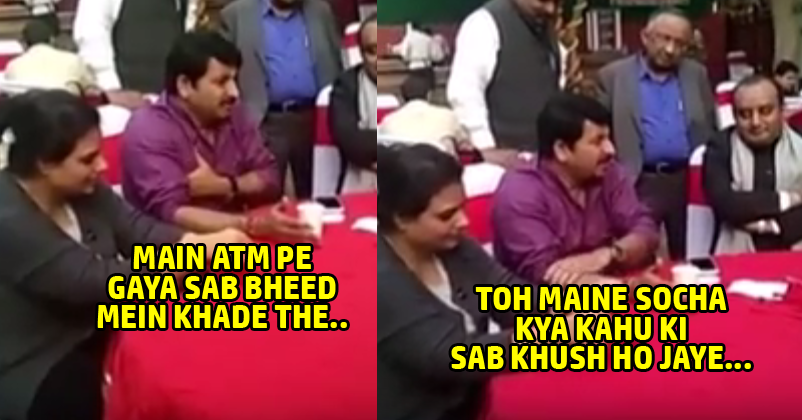 Even today, different people have different opinions about our Prime Minister’s game-changing economic policy which he declared in the night of 8th November 2016. Yes, I am talking about Demonetization. On one hand, every single person on social media turned out to be a pseudo-economist, while the others were being too critical of Narendra Modi’s decision. In short, a war broke out. However, there is no denying the fact that it was the common citizen of our country who was suffering the most while trying to deposit and withdraw his hard-earned money from various banks and ATMs. At such point of time, various leaders came into the play and showcased their concerned for the ordinary citizen. One such was BJP MP Manoj Tiwari. He was the first one among the leaders to console the people standing in long queues outside banks and ATMs by giving long patriotic speeches about the country and the sacrifice that one need to give in so as to make a better future. However, a private video of MANOJ TIWARI is now doing the rounds in the internet where he is seen mocking the very same people who he had been motivating all this while.

Have a look at it.

In the video, he mocks the people by mimicking them and shamelessly laughing by repeating the words – ‘HUM LAGGGE RAHENGEY LINE MIE’.

This video is certainly a living example of how our very own politicians make a complete mockery of our helplessness when they are in their private parties with the so-called ‘white collared’ people. It is my sincere request to all my readers to not to fall into the false promises made by such politicians in the name of patriotism or more over the JINGOISM that they show.

What are your views about this video. Please let us know in the comment section below.

Major Breakthrough For Modi Govt! UAE Govt Seizes Dawood’s Assets Worth Rs 15,000 Crores
Kaif Did A Q&A Session On Twitter & It Was Out Of The World! He’s Super Witty!